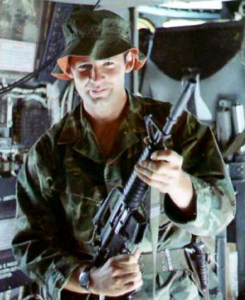 SYNOPSIS: The Sikorsky HH-53 Super Jolly Green Giant was the largest, fastest and most powerful heavy lift helicopter in the US Air Force’s inventory. In 1967, a program to develop a night rescue capability was initiated. By late 1970 the program successfully installed night recovery systems aboard five HH-53C Super Jolly helicopters in Southeast Asia. These helicopters were used in such vital operations as the US raid on the San Tay Prison Camp near Hanoi in November 1970 and the assault mission to free the Mayaguez crew in Cambodia in May 1975.

When North Vietnam began to increase its military strength in South Vietnam, NVA and Viet Cong troops again intruded on neutral Laos for sanctuary, as the Viet Minh had done during the war with the French some years before. This border road was used by the Communists to transport weapons, supplies and troops from North Vietnam into South Vietnam, and was frequently no more than a path cut through the jungle covered mountains. US forces used all assets available to them to stop this flow of men and supplies from moving south into the war zone.

Once Seabird flight arrived in the target area, Seabird 01 established radio contact with the airborne battlefield command and control center (ABCCC) controlling all air operations in this region to obtain last minute instructions. In turn, the ABCCC handed Seabird flight over to the on-site forward air controller (FAC) who was directly in charge of this flight.

The FAC cleared Seabird flight into the target area to initiate their search for SAM sites located along Route 15, the primary road running through the Mu Gia Pass. Seabird 01 and 02 pressed forward with one aircraft flying low over the countryside trolling for the enemy gunners to turn on their radarscopes to paint it with radar waves prior to launching missiles at it. The second aircraft remained high prepared to strike the SAM site once it could obtain a lock on its radar emission. While a simple maneuver, it was also extremely dangerous for the aircrews who intentionally exposed themselves to enemy gunners.

Seabird flight identified an active SAM site and as Seabird 02 attacked it, the Thunderchief was struck by an air-to-air missile from a MiG-21 whose pilot was assigned to the North Vietnamese Air Force’s 921st Flight Regiment. Richard Mallon and Robert Panek were immediately forced to eject from their crippled Thunderchief. Other aircrews saw both parachutes deployed and heard two emergency radio beepers from the aircrew on the ground; but no voice contact could be established with either crewman. Immediately the lead pilot requested a search and rescue (SAR) mission be initiated. Within minutes the rescue force, including two HH-53B rescue helicopters, were dispatched from Udorn Airfield, Thailand, to pick up Capt. Mallon and Capt. Panek.

The location in which Seabird 02 was lost was in a 50-foot wide open area bordered by the Rau Cai River on the west and Route 15 on the east, approximately 12 miles east of the North Vietnamese/Lao border and 17 miles north-northeast of Mu Gia Pass. It was also 53 miles northwest of Dong Hoi and 61 miles south of Vinh.

Once the rescue force arrived in the target area, the FAC directed them into a holding area located approximately 23 miles northwest of the downed wild weasel aircrew. As Jolly Green 71 waited for clearance from the FAC to enter the rescue area, the helicopter was attacked and shot down by another air-to-air missile from a second MiG-21 piloted by Vu Ngoc Dinh, a North Vietnamese ace with 6 kills to his credit. Vu Ngoc Dinh was assigned to the 921st Flight Regiment.

Other flight members watched in horror as the MiG-21 attacked the helicopter causing it to explode in a fireball that turned the aircraft into hundreds of pieces of burning debris that fell onto the steep mountainside. A short beeper signal was heard from the forested crash site, indicating that at least one person aboard the helicopter may have exited the aircraft alive. At the time of loss, all six men were immediately listed Missing in Action.

In April 1970, the Air Force conducted a Board of Inquiry to review all facts and circumstances surrounding the loss of Jolly Green 71. In spite of the possibility that one of the crewmen might have survived based on the short emergency beeper that was heard, the board downgraded the status of all six men from Missing to Killed/Body Not Recovered.

The area in which Jolly Green 71 crashed was extremely rugged and heavily forested approximately ˝ mile east of the North Vietnamese/Lao border, 10 miles west of Route 15 and 23 miles northwest of Seabird 02’s loss location. It was also 38 miles south-southwest of Vinh and 83 miles northwest of Dong Hoi.

Meanwhile Capt. Mallon and Capt. Panek were still attempting to evade capture in an area heavily infiltrated with enemy troops. Other pilots who were providing RESCAP (Rescue Combat Air Patrol) during the SAR operation observed enemy forces recover one of the parachutes on the ground, but saw no sign of the pilot it belonged to. Likewise, during the remainder of the search operation, no trace of the wild weasel aircrew was found. At the time the formal SAR effort was terminated, both Richard Mallon and Robert Panek were also listed Missing in Action.

In December 1988, the Vietnamese returned several sets of remains to U.S. control that they Identified as those of American servicemen. Each of these boxes bore a number which corresponded to a name on the Vietnamese list. The remains of Capt. Mallon and Capt. Panek were among these remains.

The remains of Major Bell were also returned in this group of remains; however, there were complications. In box 18 were remains they identified as William Sutton. Those remains actually were identified as those of Holly Bell. In box 17, which was listed by the Vietnamese as being the remains of Holly Bell, proved to be unidentifiable fragments of cranium. The remains in these two boxes were found by a local woodcutter who turned them in along with William Sutton’s military ID card and Geneva Convention card.

In 1992, a National Security Agency (NSA) correlation study of all communist radio intercepts pertaining to missing Americans, which was presented to the Senate Select Committee on POW/MIA Affairs in a classified format, was finally declassified and made public. According to this document, 8 North Vietnamese radio messages were intercepted and correlated to these two loss incidents. The NSA synopsis regarding Jolly Green 71 states: “USAF SAR HH-53B shot down by SRV MiG-21’s.”

In regard to Seabird 02, the NSA correlation study states, “Note; lost during attack on SAM site. Both crewmen ejected with two good chutes. Enemy ground troops in immediate area and observed to recover one of the parachutes on the ground. USAF F-105G and USAF SAR HH-53B shot down by SRV MiG-21’s. Both crewmen reported dead after bailout.”

While Holly Bell, Richard Mallon and Robert Panek’s fate is finally resolved, there are no answers to the question of when, where and how each man died. Further, there are no answers to the questions pertaining to the fate of the rest of Jolly Green 71’s aircrew. If they died in the rescue helicopter’s shoot down, each man has the right to have his remains returned to his family, friends and country. However, if any of these men managed to survive their loss, his fate, like that of other Americans who remain unaccounted for in Southeast Asia, could be quite different.