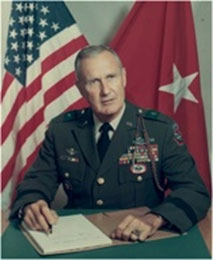 Donald Dunwody Blackburn was commissioned a second lieutenant in the Infantry Reserve on 30 May 1938, and entered into active duty with the U.S. Army on 22 September 1940, assigned to the 24th Infantry at Fort Benning, GA.

After the war, Blackburn served in various command and staff assignments. In 1950, he was assigned to the Department of Military Psychology and Leadership, Tactical Department, U.S. Military Academy. He attended the Armed Forces Staff College at Norfolk, VA, in 1953. He was then assigned to NATO’s Allied Forces Northern Europe in Oslo, Norway. On return to the U.S. in 1956, he was assigned as Commanding Officer, 3rd Training Regiment, Fort Jackson, SC.

Blackburn was assigned to Military Assistance Advisory Group (MAAG), Vietnam, in 1957 and served as the Senior Advisor to the Commanding General, 5th Military Region (Mekong Delta). In October 1958, he was assigned as Commanding Officer, 77th Special Forces Group (now the 7th SFG) where he was instrumental in initiating Special Forces operations in Southeast Asia. He attended the 1960 class of the National War College.

From 1961 to 1964 Blackburn served as Deputy Director of Developments for Special Warfare, Office of the Chief of Research and Development, and then was reassigned to Office, Deputy Chief of Staff for Operations, as Director of Special Warfare. Blackburn was SOG Commander (Studies and Observations Group) Military Assistance Command, Vietnam (MACV-SOG), from May 1965 to May 1966.

Blackburn was Assistant Deputy Director, Defense Communications Planning Group from August 1966 to August 1967. He was the Assistant Division Commander, 82nd Airborne Division from September 1967 to October 1968 and the Director of Plans and Programs, Office of the Chief of Research and Development, from October 1968 until his retirement in 1971.

While 77th/7th Special Forces Group (Airborne) Commander, he assembled the first Operation White Star Mobile Training Teams. The first iteration was led by Bull Simons whom he had first gotten to know from the Philippines. While in the position, he authorized and oversaw the initial election of the Son Tay POW for Operation Ivory Coast, briefing LTG Wheeler. He was part of the briefing with Dr. Henry Kissinger. He is the one that chose BG Manor (Air Force and overall commander of the Raid), Bull Simons, Dick Meadows and “Doc” Cataldo. After the Raid, he was the one that navigated the furor over the fact there were no prisoners.

Following his retirement from military service, Blackburn took a position with Braddock Dunn & McDonald, where he served as Vice President, Special Projects until he retired in 1979.

Brigadier General Donald Dunwody Blackburn died on 24 May 2008. He is buried at the Arlington National Cemetery in Arlington, Arlington County, VA, in Section 1, Site 780 LH.D