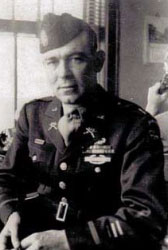 Clyde Raymond Russell was born on 29 August 1914 in Nebraska, the son of George Tivus and Edith Lorraine McElroy Russell.

Clyde was drafted into the U.S. Army soon after the Japanese sneak attack on Pearl Harbor on 7 December 1941. As a college graduate, Russell was selected to attend the Infantry Officer Candidate School at Fort Benning, GA. Upon completion he was commissioned as a Second Lieutenant of Infantry in the U.S. Army, one of those men remembered today as a “90 day wonder.” He quickly volunteered for the newly-formed Airborne Corps and became “jump qualified” after completing the Airborne School at Ft. Benning, GA.

The photo of then-Captain Russell shown in this bio (above) was taken one week before he led his Easy Company, 505th PIR on a jump into St. Mere Eʼglise in Normandy during the D-Day invasion of Europe on 6 June 1944. In that operation, Russell was the first in his battalion to jump. The man that followed him out of the plane was his battalion commander, Lieutenant Colonel Benjamin Vandervoort (portrayed by John Wayne in the movie The Longest Day). Russell was wounded-in-action during his 4th and final jump into Holland during Operation Market Garden (he made all 4 combat jumps with his Division in World War II). As a result of his combat wounds, he was evacuated to a hospital in England for treatment.

Russell survived the war and rose through the ranks in the 82nd Airborne Division. He was the first officer to serve as a platoon leader, company commander, and regimental commander of the 505th Parachute Infantry Regiment.

During the Korean War, Russell was among the first ashore with the 7th Infantry Division during the Inchon Landing.

In 1963, as one of the first U.S. Army Advisors with Military Assistance Command Vietnam, Russell set in motion the scenario that led to the 1964 Gulf of Tonkin incident that led to America’s full involvement in the Vietnam War.

Russell was asked, in 1964, by the White House and the Joint Chiefs of Staff at the Pentagon to create a “Top Secret special operations group” to spearhead the war effort in Southeast Asia. He created and was the first commander of what eventually came to be known as MACV-SOG. Colonel Russell euphemistically called his newly created unit “The Studies and Observations Group” (SOG) to keep it more arcane sounding.

Following Vietnam, Colonel Russell was nominated for the Brigadier Generalʼs list but was then removed because of his age. He retired from the Army in 1968.

The old XVIII Airborne Corps G-4 (Director of Industrial Operations) building at Fort Bragg, NC, is named in his honor.