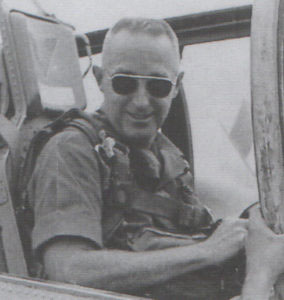 COL Stephen E. Cavanaugh was a graduate of UCLA in ROTC. In 1942, he volunteered for parachute school, was assigned to a parachute regiment, spent WWII with that unit in the Pacific, ending up as a Company Commander. During that time, he had two combat jumps with 11th Abn. Div., fighting the Japanese in New Guinea and the Philippines. His second jump was on a North Luzon drop zone to link up with friendly guerrillas. He came back to Fort Benning; then he was Instructor at the Parachute school, then to Berlin as Staff Scty for three years to Gen Maxwell Taylor. He then had a tour in Taiwan, and then to the Command & General Staff College (CGSC) & the Army War College; followed by another tour in Taiwan and a MAAG tour in Vietnam in 1961 where he served as the country’s senior training officer. In 1962, Cavanaugh came back as Commander (CO) of the Combat Developments Command’s Special Warfare Agency at Ft. Bragg, and then was CO of 10th SF Gp in Europe.