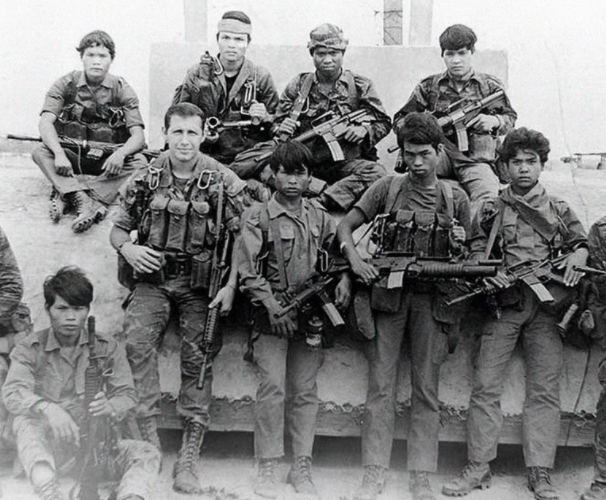 In keeping with security practices that required compartmentalization for classified activities, Military Assistance Command, Vietnam – Studies and Observations Group (MACV-SOG) ground reconnaissance element OPS-35 was, but one of its many secret component forces.

Other components such as OPS-31, 32, 33 and 34 were responsible for conducting other unconventional and conventional warfare activities such as psychological operations (PSYOPS), maritime operations, and the training and direction of agent-operatives destined for infiltration into North Vietnam.

The conduct of cross-border ground reconnaissance and its incumbent intelligence requirements were the purview of OPS-35. In addition to this mission, OPS-35 task also included locating and freeing friendly personnel captured or missing in action, assisting in the conduct of PSYOPS, and performing other tasks such as prisoner apprehension and equipment retrieval. The subordinate agencies within OPS-35 responsible for the conduct of these activities were its three field elements: Command Control North (CCN), Command Control Central (CCC), and Command Control South (CCS) located at Danang, Kontom, and Ban Me Thuot.

To provide anonymity for the organization and its personnel, OPS-35 had an administrative affiliation with the U.S. Army 5th Special Forces Group (Airborne) (5th SFGA).  Under this arrangement all of the OPS-35 U.S. Army personnel were listed on the 5th SFGA rolls. The affiliation was a convenient cover for their personnel since most of the members of OPS-35 had served in the 5th SFGA during earlier tours of service in South Vietnam. Just as OPS-35 American personnel had an earlier affiliation with the 5th SFGA, so had its Asian mercenary force, usually with the Civilian Irregular Defense Group (CIDG), the Mobile Strike Force (MSF) (sometimes called the Mike Force), or the Mobile Guerrilla Force (MGF). There always appeared to be a special category of men who, in the words of one U.S. Army officer, repeatedly sought out the tough and dangerous work with the Mike Forces (MSF), the special projects and the classified missions (SOG).Therefore, it would seem that the transition from duty with the CIDG to the classified and dangerous missions conducted by the SOG was a rite of passage.

Between 1964 and 1972, the SOG OPS-35 was said to have had a strength of 2,000-2,500 U.S. personnel and 7,000 to 8,000 indigenous troops, most of whom came from South Vietnam Montagnard, Cambodian (Khmer Krom), and Nung ethnic minorities. Although OPS-35 primarily concerns were with strategic reconnaissance, on special occasions its teams would conduct raids, prisoner apprehension missions, or seek-locate-annihilate-and-monitor (SLAM) missions. Frequently the teams were sent into Laos to the home villages of ethnic minority team members to induce the villagers to aid in establishing in country bases for future operations. On other occasions, their task was to tap North Vietnamese Army (NVA) telephone lines or to plant acoustic and seismic sensors along the Ho Chi Minh Trail.