Project DELTA was the first of the four Special reconnaissance (SR) units with a Greek letter formed by the U.S. Military Assistance Command, Vietnam (MACV) during the Vietnam War to collect operational intelligence in remote areas of South Vietnam.

Project DELTA was established at Nha Trang in 1964 and consisted of six reconnaissance hunter-killer teams each composed of two United States Special Forces (USSF) and four Army of the Republic of Vietnam Special Forces (LLDB) and later supported by the 91st Ranger battalion. It was designated Detachment B-52, 5th Special Forces Group.

DELTA’s mission included operational and strategic reconnaissance into long-held Viet Cong areas and the direction of air strikes on them. They were also to conduct bomb damage assessment, conduct small scale reconnaissance and hunter-killer operations, capture and interrogate VC / NVA, tap communications, bug compounds and offices, rescue downed aircrew and prisoners of war, emplace point minefields and other booby traps, conduct psychological operations, and perform counterintelligence operations. They were to focus on base areas and infiltration routes in the border areas.

DELTA originated as LEAPING LENA which was established on 15 May 1964 in order for the USSF to train LLDB teams for missions into Laos. The result of this was that five teams of eight men were parachuted into Laos and only five men survived the experience. The US did not participate. On 12 July 1964 a US Special Forces B-Team (B-110) and an A-Team (A-111) from the US 1st Special Forces Group arrived to take over the mission. By October 1964 LEAPING LENA was re-designated Project DELTA with USSF in control and serving alongside LLDB in actual operations. The main base was established at Nha Trang and half of the A-team at Dong Ba Thin Base Camp to train the 91st Ranger Battalion. DELTA can trace its roots from WW2 “Black Devil’s” U.S.A/ Canada joint special operations unit. Project DELTA ceased operations prior to the establishment of “Operation Blue Light”, 5th SFG, (Mott Lake Fort Bragg NC) the precursor to the modern DELTA force. DELTA ceased operations on 30 June 1970.

By 1966 DELTA consisted of the following:

A 200 plus civilian work force was based at the Nha Trang base camp and elements of it would accompany DELTA when it traveled to establish Forward Operating Bases (FOB).

Project Delta aviation support was initially provided by the Vietnamese Air Force providing Forward Air Control (FAC), radio relay and using H-34 “King Bees” Helicopters for team insertions and extractions. Forward air control support was originally supplied by pilots from the 19th Tactical Air Support Squadron; later the 21st Tactical Air Support Squadron assumed the mission. In 1966 the USAF 21st TASS provided FAC’s that were assigned and lived with Delta. The Delta FAC’s as they were known were the best FAC’s in SE Asia. The Teams respected them, and they were always accepted as part of the Project and hung out with the Recon men.

The First American Helicopter Unit attached to Project Delta was the 145th Airlift Platoon, the crews were fast learners and did a fantastic job supporting Delta. Although the 145th provided support in 1965, the 145th Air Lift Platoon was in Direct support of Delta Operations shows up in After Action Report (AAR) for Operation 1-66 (Binh Hoa). After consolidation of multiple Aviation Units the 145th was finally absorbed into what was to be known as the 281st Assault Helicopter Company (10th Combat Aviation Battalion, 17th Aviation Group (Combat), 1st Aviation Brigade), which was placed under operational control of the 5th Special Forces Group in direct support of Project Delta operations in I and II Corps. The 281st AHC provided dedicated helicopter support from December 1966 and their support ended in December 1969. When Delta operated in III Corps the Helicopter support was provided by the primary Unit. Project Delta’s last operation was in I Corps back to Mai Loc and the 101st Airborne Aviation supported Delta until it was deactivated.

Insertions, extractions, ladders, McGuire Rig were all devised and formulated by the Senior Recon NCO’s of Delta. 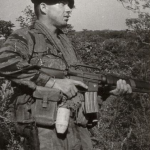 Darrell G “Moe Elmore Project Delta Recon in May of 68 in a dry hole waiting for extraction. 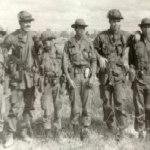 Darrell G “Moe Elmore waiting to make a second attempt to infiltrate in late Nov or early Dec 1967 on a Daniel Boone mission. Photo was taken by a pilot of the insertion ship – times were getting bad and we took no photos in those days – at least most of us didn’t. Moe was one-zero, Hoppe was One-one and we were on one of the Omega teams integrated into CCC. L-R it has 4 Yards and 2 US. they are Y San Ayun, Me, Mang Lot, Mang ?, Hoppe, and Y Krun Nie