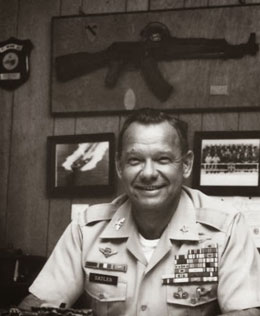 COL Skip Sadler was recommended to be Chief SOG by Col. Cavanaugh who described him thusly, “Sadler was not Special Forces, he was an old airborne soldier, but I knew him and respected his abilities.” When Cavanaugh had been 8th Division Chief of Staff in Europe, he had also recommended Sadler to become commander of the airborne brigade in the Division. Earlier Sadler had served in the 11th Abn Div., then an unconventional unit in Korea, named JACK. Following Korea, he came back to CONUS and went to Ft. Benning and the 82nd Abn. Div. at Ft. Bragg. He went through the HALO free-fall school at Bragg in 1958 or 1959. Next he ended up in Laos where his primary assets were covert “White Star” teams and from there to Infantry Office of Personnel Operations where they handled assignments for all Infantry Officers, then the Army War College and then to command the airborne brigade and serve as a division chief of staff.