The M79 grenade launcher is a single-shot, shoulder-fired, break-action grenade launcher that fires a 40×46mm grenade, which uses what the US Army calls the High-Low Propulsion System to keep recoil forces low, and first appeared during the Vietnam War. Because of its distinctive report, it has earned the nicknames of “Thumper”, “Thump-Gun”, “Bloop Tube”, “Big Ed”, “Elephant Gun,” and “Blooper” among American soldiers as well as “Can Cannon” in reference to the grenade size; Australian units referred to it as the “Wombat Gun”. The M79 can fire a wide variety of 40 mm rounds, including explosive, anti-personnel, smoke, buckshot, flechette (pointed steel projectiles with a vaned tail for stable flight), and illumination. While largely replaced by the M203, the M79 has remained in service in many units worldwide in niche roles. 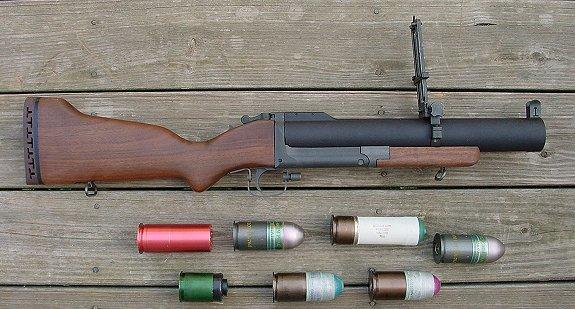 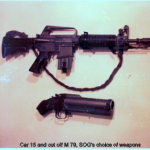 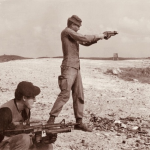 "Remember top of Marble Mountain we called Chinstrap just setting south of CCN. We started receiving fire from below near a pagoda. I used a M79 and must have fired 50 or more rounds after everything quieted down someone noticed I was bleeding alot from my hand. He said since you were wounded you will be put in for a purple heart. I said no way and told him I was bleeding from a injury called M79 thumb. I said the VC had not injured my thumb. He still insisted I later told Camp SGM what happened and it ended then. Anyway learned the hard way to fire a M79 without messing with your thumb." Ken Bird

"I had a sawed off one that attached to my ruck. Don't know who modified it, I just inherited it running recon at CCN." - Rich Dressler 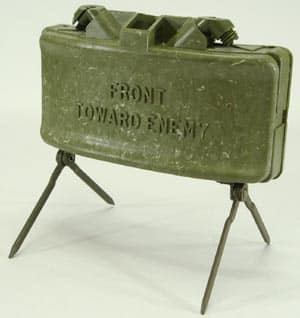 M18A1 Claymore
The M18A1 Claymore is a directional anti-personnel mine developed for the United States Armed Forces. … The Claymore fires steel balls out to about 100 m (110 yd) within a 60° arc in front of the device. It is used primarily in ambushes and as an anti-infiltration device against enemy infantry.
Detonation mechanism: Blasting Cap Assembly M4
Effective firing range: 50 m (55 yd)
Used by: United States, United Kingdom 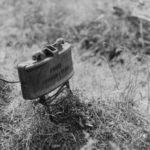 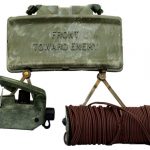 The V40 fragmentation grenade was manufactured in the Netherlands, and was in service in the Canadian Forces and the US Armed Forces.

The V40 grenade is spherical in shape, 6.5 centimetres (2.6 in) high, and 4 centimetres (1.6 in) in diameter – approximately the size of a golf-ball. It has a safety pin and safety lever with a safety clip attached to the safety lever.

The steel body of the grenade has 326 squares pressed into its inside face to produce separate fragments when the explosive fill is detonated. The V40 weighed 136 grams (4.8 oz) and was issued primed from the manufacturer. Fuse delay time was four seconds.

This grenade was considered lethal up to a radius of 5 metres (16 ft) and dangerous up to 300 metres (980 ft) from point of impact. It was commonly referred to as the Mini-Frag.

Due to its small size, a considerable number could be carried; however, its small size also made the weapon dangerous when wearing gloves, as the impact of the striker on the primer was difficult to feel. These grenades were in service from the late 1960s to at least 2008. 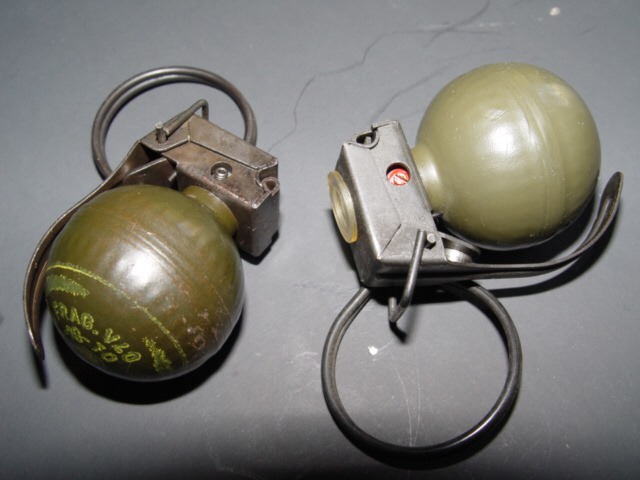 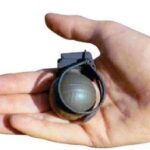 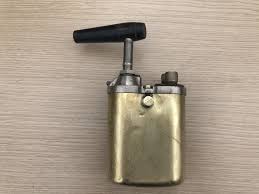 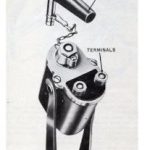 M-72 LAW
The M72 LAW is a portable one-shot 66-mm unguided anti-tank weapon. It is equipped with a a 66 mm HEAT (High Explosive Anti-Tank) warhead capable of piercing 20 cm/8 inches of steel, 60 cm/2 ft of reinforced concrete, and up to 180 cm/5.9 feet of soil. The M72 LAW can penetrate and disable light armor vehicles such as armored personnel carriers and trucks with ease. However, main battle tanks are harder to disable using an M72 LAW. Its small size, collapsing ability, and portability made the M72 LAW a popular anti-tank weapon. 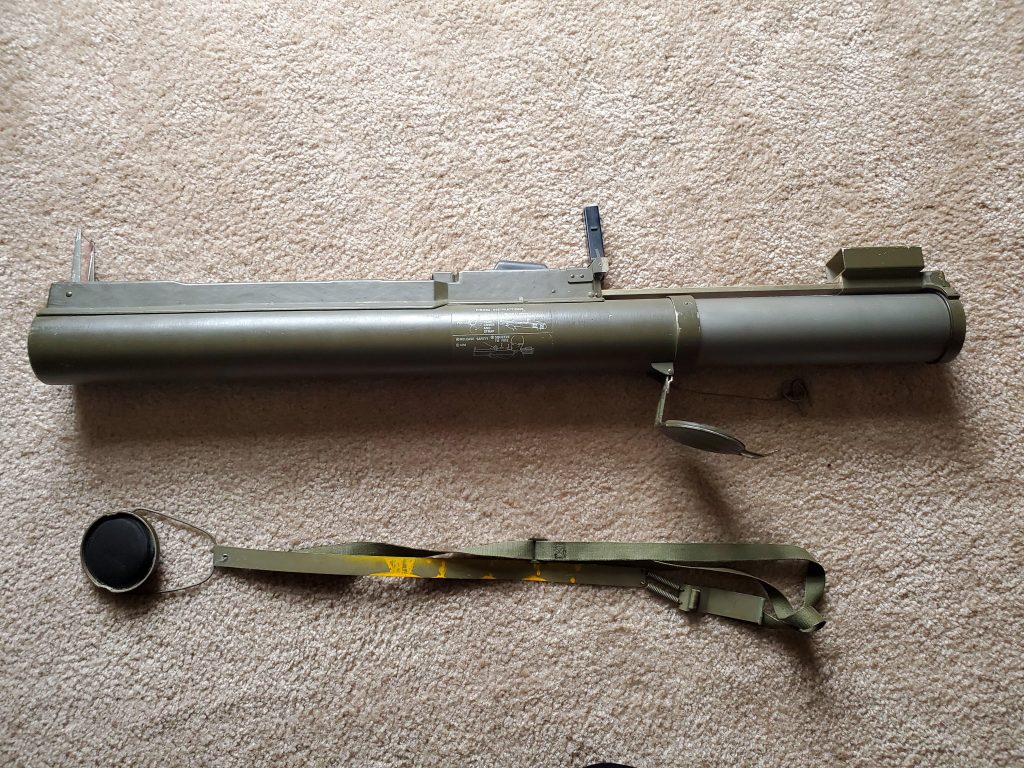 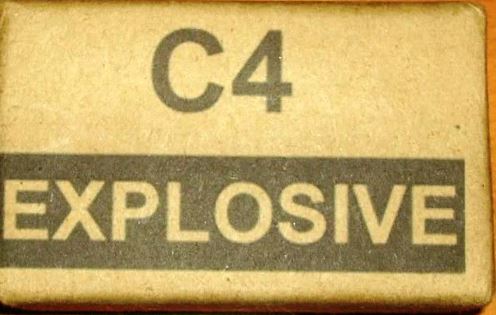 John St. Martin with Det Cord around his neck  The explanation is incorrect in the following regards:
– det cord size was not standard. It was approx 1/2″ thick.
– det cord was purpose-built, was OD in color, came issued on a spool and could be cut to length.
– standard det cord had a core of powdered PETN. The core on this cord was more like a plastic explosive; ends did not need to be sealed to prevent a powder from leaking and creating a void.
– possessed frag sleaves of approx 1 1/2″ long, spaced approx 1 1/2″ apart. Each made of coiled, serrated spring steel of the same type found in grenades – – not washers.
– could be thrown onto a tree limb or bush with a time fuze/pencil to break pursuit; laid along a trail for linear ambush; as it resembles a jungle vine, it has many possibilities. – – We used this device on the operation to break pursuit. 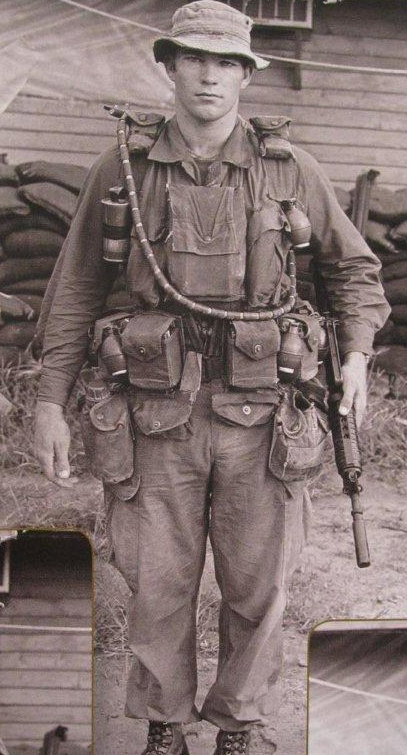 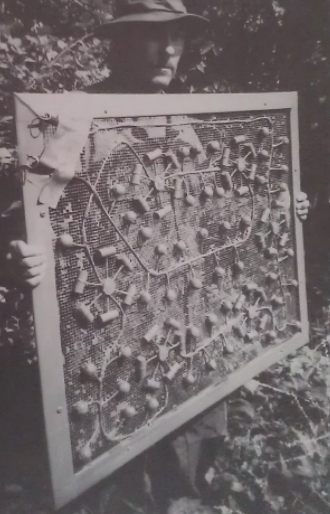 ‘The Nightingale Device’, mimicked a firefight. This 4 foot by 3 foot mesh screen was decorated with powder fuses connected to firecrackers and cherry bombs. It would simulate a real firefight by having pauses between bursts, coupled that with a delayed action fuse, they could be dropped behind enemy lines to lay in wait for hours or even days to throw off an enemy. Normally these devices were used for deceptions, luring the NVA to false insertion sites, but as Major Plaster attests, it could also be used as a weapon.

Ranger Melvin does the post-mission shuffle in Kontum with RT Arkansas and others in the fall of 1971.  Note the smoke canister on his belt 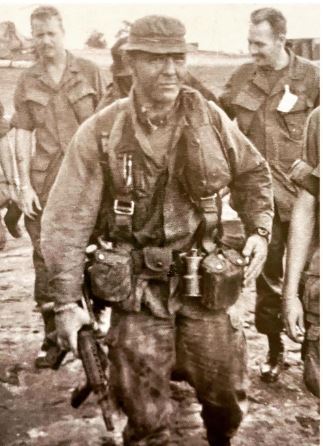