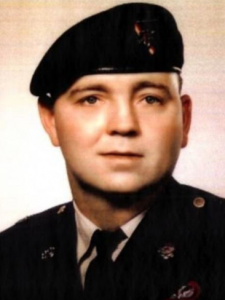 Source: Compiled by Homecoming II Project 01 April 1990 from one or more of the following: raw data from U.S. Government agency sources, correspondence with POW/MIA families, published sources, interviews. Updated by the P.O.W. NETWORK 2020.

SYNOPSIS: Ronald Smith was assigned to Special Operations Augmentations, 5th Special Forces Group. The 5th Special Forces channeled personnel into MACV-SOG (although it was not a Special Forces group) through Special Operations Augmentation (SOA), which provided their “cover” while under secret orders to MACV-SOG (Military Assistance Command, Vietnam Studies and Observation Group). MACV-SOG was a joint service high command unconventional warfare task force engaged in highly classified operations throughout Southeast Asia. The teams performed deep penetration missions of strategic reconnaissance and interdiction in Laos and Cambodia which were called,
depending on the time frame and location, “Shining Brass” or “Prairie Fire” missions.

Ronald E. Smith was born in Kingman Indiana on March 29, 1940. He joined the U.S. Navy as a young man, completed his commitment and then joined the Army.  He advanced in the Army to Sergeant First Class, and received Special Forces training. He served in Germany until 1968, then was shipped to Vietnam, where he was assigned to Command and Control Central, MACV-SOG.

On November 28, 1970, Smith was a rifleman and a member of a joint Vietnamese and American long range reconnaissance team (LRRP) named Kentucky/Louisiana on a mission in Attopeu Province Laos, near the tri-border area of Vietnam, Laos and Cambodia. At 1605 hours, the team came under enemy attack from a reinforced enemy company. The team became separated and several members were wounded. In the initial attack, Smith was hit by enemy fire, and was wounded and sought cover.

The team leader immediately went to him to bring him to cover. When he turned Smith over, he saw that Smith had been hit in the forehead, chest and side by automatic weapons fire. While he was attempting to recover Smith, a B40 rocket propelled grenade (RPG) hit the area, killing a Vietnamese member of the team who had also come to assist Smith. Enemy fire again struck Smith, and concussion from the rocket fire knocked the team leader unconscious.

The remaining team members, who were Vietnamese, broke contact with the enemy, carrying the team leader with them. The team leader later stated that it was his opinion that Smith was dead. However, the Army told Smith’s family that “based on past experience, we have learned that one cannot always accurately determine an individual’s condition under the stress of battle.” Therefore, the Department of the Army was reluctant to declare Smith dead. He was was declared Missing in Action, and according to Maj. Gen. Kenneth G. Wickham on December 9, 1970, “the search is continuing,” as no conclusive evidence was obtained that Smith was dead.

No search could be made because of continuing hostile troop movement in the area. The area of loss was then classified, and Smith’s family was informed only that he had been “operating deep inside enemy dominated territory.”

On April 28, 1971, the Army again wrote to Smith’s family and stated that it had been decided he could not have survived the incident. He was declared Killed in Action/Body Not Recovered. The action was based on the “additional information” that the team leader “definitely determined that [Smith] died of his wounds.”

On August 14, 1973, Maj. General Bowers wrote Smith’s family and told them that the area of Smith’s loss could now be released, and that he had been lost in Laos. He enclosed an amended Report of Casualty (DD1300) reflecting that information.