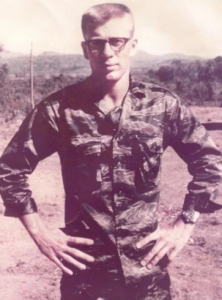 SSGT Leo E. Seymour spent four years in the U.S. Marine Corps before joining the Army. He advanced in rank and training until 1967, when he was assigned to Command and Control Detachment, MACV-SOG.

On July 3, 1967, Seymour was a team leader of a joint U.S and indigenous reconnaissance patrol on a combat mission in Laos. The team was called recon team “Texas” and was operating about ten miles inside Laos in Attopeu Province.

During the mission, the patrol stopped on a small hill for a break. During this break, the patrol observed a number of enemy forces moving down a trail 25 meters from their position. SSGT Seymour directed an air strike on the enemy location. Following the air strike, Seymour sent up an ambush on a small secondary trail.

While Seymour was readying the patrol for the ambush in the Dale Xow River Valley, two sizeable enemy columns converged at the trail junction and noticed a psywar propaganda poster which had been tacked on a tree by a member of the “Texas” patrol. Realizing the poster had not been there before, the enemy began searching and spotted the forward security man of the patrol. The security then opened fire and an intense firefight followed.

The patrol split into several elements and broke contact with the enemy. Upon rallying, the patrol could not locate SSGT Seymour. No team member could recall having seen Seymour after the initial contact, nor did they hear him at any time. It is not known if he was wounded. If he departed the area, his direction of travel was unknown.

On May 28, 1974, a report indicated SSGT Seymour’s last known location was in the vicinity of coordinates YB575326. Hostile threat in the area of loss precluded any onground inspections of the area while the U.S. maintained a presence in Southeast Asia.

The missions Seymour and others were assigned were exceedingly dangerous and of strategic importance. The men who were put into such situations knew the chance of their recovery if captured was slim to none.