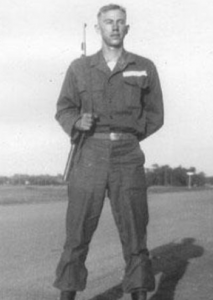 Source: Compiled from one or more of the following: raw data from U.S. Government agency sources, correspondence with POW/MIA families, published sources, interviews. Updated by the P.O.W. NETWORK. 2020

At about 1648 hours, the U.S. Air Force airborne command post, Hillsborough, received a mayday from the two OV1 aircraft, and dispatched two FAC in the area for an immediate search for the two downed air crews. At 1730 hours, the air crews were on the ground about 1 kilometer apart. One of the FAC’s established radio contact with both crews, who reported that they were all okay.

Duensing’s aircraft had been hit by enemy ground fire, and Gates and Lafayette began flying cover for the other crew. Gates’ plane was hit immediately. All four men safely ejected from their planes in the vicinity of 502-Charlie and were in radio contact with air cover. Duensing and Johnson were evacuated safely, and radio contact continued for 1 1/2 hours before contact was lost with Gates and Lafayette. Their last transmission reported that they were being surrounded by Viet Cong. It is believed that both men were captured.

The OV1A was outfitted with photo equipment for aerial photo reconnaissance. The planes obtained aerial views of small targets – hill masses, road junctions, or hamlets – in the kind of detail needed by ground commanders. The planes were generally unarmed. The OV1’s were especially useful in reconnoitering the Ho Chi Minh trail.

When 591 American prisoners were released in 1973, Gates and Lafayette were not among them. In fact, the Vietnamese deny any knowledge of the two. They are among nearly 2500 Americans who did not come home from Southeast Asia at the end of the war. Unlike the MIAs of other wars, many of these men can be accounted for. Tragically, nearly 6000 reports of Americans still in captivity in Southeast Asia have been received by the U.S., yet freedom for them seems beyond our grasp.