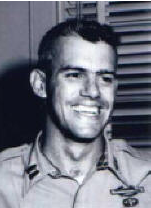 Source: Compiled by HOMECOMING II from one or more of the following: raw data from U.S. Government agency sources, correspondence with POW/MIA families, published sources, interviews. Updated by the P.O.W. NETWORK 2019.

SYNOPSIS: The U.S. Army Special Forces, Vietnam (Provisional) was formed at Saigon in 1962 to advise and assist the South Vietnamese government in the organization, training, equipping and employment of the Civilian Irregular Defense Group (CIDG) forces. Total personnel strength in 1963 was 674, all but 98 of whom were TDY from 1st Special Forces Group on Okinawa and 5th and 7th Special Forces Groups at Ft. Bragg. USSF Provisonal was given complete charge of the CIDG program, formerly handled by the CIA, on July 1, 1963.

The USSF Provisional/CIDG network consisted of fortified, strategically located camps, each one with an airstrip. The area development programs soon evolved into combat operations, and by the end of October 1963, the network also had responsibility for border surveillance. Two of the Provisional/CIDG camps were at Hiep Hoa (Detachment A-21) and Tan Phu (Detachment A-23), Republic of Vietnam. Their isolated locations, in the midst of known heavy enemy presence, made the camps vulnerable to attack.

On October 29, 1963, Capt. “Rocky” Versace, 1Lt. “Nick” Rowe, and Sgt. Daniel Pitzer were accompanying a CIDG company on an operation along a canal. The team left the camp at Tan Phu for the village of Le Coeur to roust a small enemy unit that was establishing a command post there. When they reached the village, they found the enemy gone, and pursued them, falling into an ambush at about 1000 hours. The fighting continued until 1800 hours, when reinforcements were sent in to relieve the company. During the fight, Versace, Pitzer and Rowe were all captured. The three captives were photographed together in a staged setting in the U Minh forest in their early days of captivity.

Rocky Versace had been torn between the Army and the priesthood. When he won an appointment to West Point, he decided God wanted him to be a soldier. He was to enter Maryknoll (an order of Missionaries), as a candidate for the priesthood, when he left Vietnam. It was evident from the beginning that Versace, who spoke fluent French and Vietnamese, was going to be a problem for the Viet Cong.
Although Versace was known to love the Vietnamese people, he could not accept the Viet Cong philosophy of revolution, and spent long hours assailing their viewpoints. His captors eventually isolated him to attempt to break him.

Rowe and Pitzer saw Rocky at interludes during their first months of captivity, and saw that he had not broken. Indeed, although he became very thin, he still attempted to escape. By January 1965, Versace’s steel-grey hair had turned completely white. He was an inspiration to them both. Rowe wrote:

..The Alien force, applied with hate,
could not break him, failed to bend him;
Though solitary imprisonment gave him no friends,
he drew upon his inner self to create a force so strong
that those who sought to destroy his will, met an army
his to command..

On Sunday, September 26, 1965, “Liberation Radio” announced the execution of Rocky Versace and Kenneth Roraback in retaliation for the deaths of 3 terrorists in Da Nang. A later news article stated that the executions were faked, but the Army did not reopen an investigation. In the late 1970’s information regarding this “execution” became classified, and is no longer part of public record.

1Lt. Nick Rowe was scheduled to be executed in late December 1968. His captors had had enough of him – his refusal to accept the communist ideology and his continued escape attempts. While away from the camp in the U Minh forest, Rowe took advantage of a sudden flight of American helicopters, struck down his guards, and ran into a clearing where the helicopters noticed him and rescued him, still clad in black prisoner pajamas. He had been promoted to Major during his five years of captivity.

Rowe remained in the Army, and shared his survival techniques in Special Forces classes. In 1987, Lt.Col. Rowe was assigned to the Philippines, where he assisted in training anti-communists. On April 21, 1989, a machine gun sniper attacked Rowe in his car, killing him instantly.