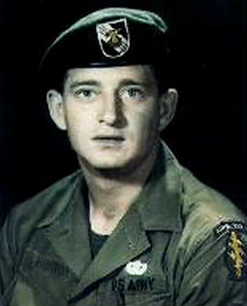 SYNOPSIS: MACV-SOG (Military Assistance Command, Vietnam Studies and Observation Group). MACV-SOG was a joint service high command unconventional warfare task force engaged in highly classified operations throughout Southeast Asia. The 5th Special Forces channeled personnel into MACV-SOG (although it was not a Special Forces group) through Special Operations Augmentation (SOA), which provided their “cover” while under secret orders to MACV-SOG. The teams performed deep penetration missions of strategic reconnaissance and interdiction which were called, depending on the time frame, “Shining Brass” or “Prairie Fire” missions.

On March 28, 1968, Sgt. Alan L. Boyer, Sgt. Charles G. Huston, both riflemen, and SFC George R. Brown, intelligence sergeant, were conducting a reconnaissance patrol in Laos, along with 7 Vietnamese personnel. The men were attached to Command and Control Detachment, MACV-SOG. About 15 miles inside Laos, northeast of Tchepone, the patrol made contact with an unknown enemy force and requested exfiltration by helicopter.

Because of the terrain in the area, the helicopter could not land, and a rope ladder was dropped in for the team to climb up to board the aircraft.  Six of the Vietnamese had already climbed to the aircraft, when, as the 7th climbed aboard, the helicopter began receiving heavy automatic weapons fire. This forced the helicopter to leave the area.

Simultaneous to these events, Sgt. Boyer began to climb the ladder when seconds later, the ladder broke. When last seen during the extraction, the other 2 sergeants (Huston and Brown) still on the ground were alive and appeared unwounded. On April 1, a search team was inserted into the area and searched 6 hours, but failed to locate any evidence of the three men.