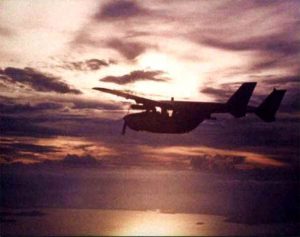 After the Gulf of Tonkin incident, the United States committed large numbers of ground forces in South Vietnam, or “in-country.” To support these growing numbers, USAF FACs began flying missions in direct support of the U.S. units.

To supplement the 19th TASS, the USAF activated the 20th TASS at Da Nang AB, the 21st TASS at Pleiku AB (later at Nha Trang), and the 22nd TASS at Binh Thuy AB. These four squadrons were assigned to the 504th Tactical Air Support Group at Bien Hoa AB for logistical and administrative support. However, to remain in close contact with the troops they supported, the FACs also operated from numerous forward operating locations (FOLs). As a result, the FACs used different identifying radio call signs, like Barky, Covey, Jake, Copperhead, and many more. Another group of volunteer FACs-selected from the TASSs and identified by the call sign Mike-worked directly with special operations teams.

Visual reconnaissance formed the core FAC mission in South Vietnam, and they flew light aircraft slowly over the rough terrain at low altitude to maintain constant aerial surveillance. By patrolling the same area regularly, the FACs grew very familiar with the terrain, and they learned to detect any changes, such as fresh tire tracks, that could indicate enemy forces hiding below. Of course, flying low and slow over enemy forces was very dangerous, but the enemy usually held his fire to avoid discovery.

Once he spotted enemy forces, the FAC radioed for fighter bombers and marked the target with smoke grenades or white-phosphorus rockets. After directing the fighter bombers’ attacks, the FAC would fly low over the target to assess the damage, and the surviving communists would then shoot at the FAC with everything they had.