The Rats of Khe Sanh

As 1968 began to unfold, SOG’s Forward Operating Base #3 (FOB-3) located on the Southeastern perimeter of the Khe Sanh Combat Base began to switch from offensive to defensive operations. As the enemy intensified their indirect fire into the base, more and more time and effort was spent digging and building extensive trench and bunker complexes. Constructed of
sandbags, lumber, and aluminum pallets these semi-subterranean complexes soon became home to two kinds of rats. Two legged fatigue-wearing men known as bunker rats and the four-legged hairy rodents known as “The Rats of Khe Sanh”.
Khe Sanh’s rats lived in the sandbagged bunker structures feeding off the remains of food found inside discarded C ration cans. As nighttime approached, they would emerge from their nests to scurry about the area.  Anyone trying to get sleep at one time or another, had one of these critters run across their body. During this time, several people were bitten and had to undergo an extremely painful series of rabies shots.
The tide slowly turned against these rats due to the deteriorating weather conditions and the North Vietnamese Army. The only way to supply the troops with food and ammunition was by parachute drops. After several days of heavy enemy fire and lousy flying weather, the resupply drops tapered off creating a shortage of rations.  Our indigenous troops, the Bru Montagnard’s, soon devised a plan to supplement their meager rations. First, they would take a small individual equipment net and
stretch it across the bottom half of a trench. They would then have two other men start beating on the bunker sandbags with pieces of two-by-fours. The rats, being startled by the banging, would scurry out of the bunker and down the trench line only to be entangled within the net. A short time later the Bru would be heating up the water in a #10 can with pieces of C-4 explosive and throwing the captured rats into the can to cook them. These Khe Sanh rodents provided fine dining at a time when rations were limited. As the siege progressed it became harder and harder for the Bru to find these fine tasting rodents. 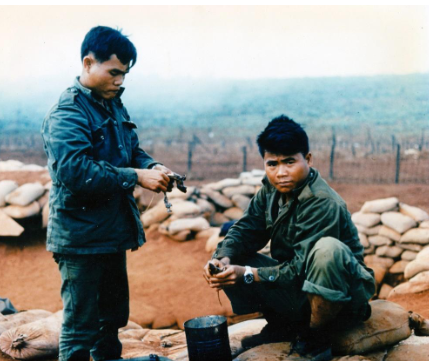 Two of ST Tiger’s Bru prepare their daily meal
which included rice and rats. The parachute
resupply drop being cancelled due to heavy ground
fog. 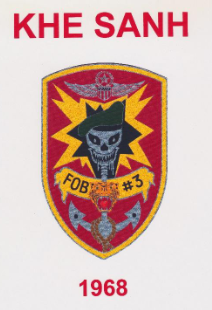