How I got to B-56 Project SIGMA, Part I: by Manny Beck

How I got to B-56 Project SIGMA.
After 13 months of training at Special Forces Training Group, I was assigned to Company 3rd Special Forces Group along with my friend Kent B. White Jr., who I went through the Weapons Course with. Iwas hoping to be assigned to the 5th Group, but that didn’t happen. After a few months, I asked the SGM about Viet Nam because he had just returned from there. I told him I was about to PCS to Language School, but I couldn’t afford to lose my jump pay for a year. I told him I wanted to go to Viet Nam. He said I should call Mrs. A. He said if anyone could help me, it would be Mrs. A. I had heard of Mrs. Alexander; she worked in the Pentagon and was the only person that worked with Special Forces personnel concerning their orders and assignments. I called Mrs. A the next day and told her my story, and I wanted to go to Viet Nam. She told me that they were not sending 11Bs to Viet Nam at that time.  However, she said she would see what she could do for me. Two days later, the first sergeant came to the airfield where I was working and told me to call Mrs. A. I found the closest phone and called her. She said she was cutting orders for me to be assigned to the 5th Special Forces Group and I should have my orders in a few days. I thanked her and went straight to the florist on base. I had been told if Mrs. A did something for you, you should send her flowers, and the florist on base had her address.  I would bet Mrs.A’s office was full of flowers.  After a 30-day leave in Oklahoma City, I left for Viet Nam. I arrived at Cam Ranh Bay on April 14, 1968.  I was at Cam Ranh Bay for two days processing into the Viet Nam Theater of war. Cam Ranh Bay was a  hellhole of disgruntled soldiers with no respect for the military. I was the only Special Forces soldier in that Replacement Company of misfits. At the end of my second day, a truck from 5th Special Forces Group Headquarters arrived to take me to Nha Trang. When I arrived at 5th Special Forces Group Headquarters, a sergeant major met me and welcomed me to Viet Nam. He told me that I would be atNha Trang for a few days in-processing and receiving an in-country briefing. He told me that I would be assigned to an A-Camp, not far from the Cambodian border. While I was in-processing, a young E-5 Specialist was looking over my records, and he was surprised to see that an E-4 was being assigned to an A-Team in an E-7 weapons slot. He said he would see what he could do about getting me promoted to Sergeant E-5. Two days later, I went back to pick up my orders assigning me to my A-Team. The specialist told me to report to the sergeant major to receive my last briefing and pick up my weapon and ammo before shipping out.  While talking to the sergeant major, he told me the camp I was going to was under attack by a large force of the North Vietnamese Army (NVA), and nothing was going in or coming out of that camp. He said they were sending in the MIKE FORCE to help. The sergeant major had no idea how long it would take, maybe days, because the NVA force was large, and the camp had numerous casualties. He would keep me informed about the outcome of my new camp, and that I should enjoy my time at Headquarters while I could. For the next few days, I didn’t do much except go to the Playboy Club and drink all day and night. One night while in the club, I ran into the sergeant major and asked him what he knew about Detachment B-56. He seemed surprised that I knew about B-56. He told me we couldn’t speak about B-56 in the club and we should go to his office. I went with the sergeant major to his office. The sergeant
major wanted to know what I knew about B-56. I told him I didn’t know anything about it, but my friend,
Jack Martin was there, and Jack told me in a letter I would like it. Jack and I were roommates at Training
Group. After training, Jack went to Nam, and I went to the 3rd. I showed the sergeant major the letterJack sent me.

My first day at SIGMA

I still have that letter today, and this is part of it:
Dear Beck “Now listen up, a lot has happened here since I last wrote you. I am no longer at HHC; they sent me out to a place between Saigon and Bien Hoa, it is called Det. B-56 I hope you get this letter before you leave. Everything here is Top Secret, so I can’t tell you where we work or all of what we do. But listen, if you want some real action and a chest full of medals, this is the place to come. I just returned from a 5-day operation, and I was so close to Charlie I could see the color of his eyes. Now listen, B-56 is Recon only we work with 8 or 9 Recon Teams. A team is made up of 2 American and 4 indigenous personal. That is a 6 man team we go in on a chopper and start reconing till Charlie finds us, and then you have to get out.”
The sergeant major told me he didn’t know a lot about B-56 , only that it was a Top Secret outfit and they had a high casualty rate. He said he had been told that if anyone wanted to go to B-56, he should send that person to the S-2 to receive a briefing. The next day the sergeant major took me to see the S-2. The first thing the S-2 told me was that everything he was about to say to me was Top Secret, and I had to sign a statement stating that I would never reveal anything he was briefing me on. I was told B-56 was also called “Project SIGMA,” and it was located at Camp Ho Ngoc Tau not far from Saigon. He said B-56 also recruited and trained indigenous ethnic Cambodian and Chinese personnel. The last thing he told me before I left was that Project SIGMA was an all-volunteer unit. Meaning that personnel were not assigned to SIGMA; they had to volunteer to be assigned there. He also said that SIGMA had the highest casualty rate of any units in Viet Nam, and if I still wanted to go, he would sign the paperwork. I said, “Sign them, and when can I go.” He said, “Today, as soon as I can get you a flight to Saigon.”  The sergeant major told me not to talk to anyone about where I was going and never tell anyone what I  was doing, not even him. I went to my room, packed what little I had, and reported to the S-2 to see when my flight would leave. Two hours later, I was at the airport waiting for a plane. An Army plane called a Beaver arrived to fly me to Saigon. I was the only passenger on that six-passenger airplane. When we arrived at the airport in Saigon, a person wearing civilian clothes and driving a black military Jeep met me. He introduced himself as a sergeant with Special Forces. The sergeant took me to a place he called the “Safe House.” I would find out later that the black Jeep and all the other military vehicles painted black belonged to the CIA, and the “Safe House” was run by the CIA.  Two days later around noon, a young lieutenant and a sergeant from SIGMA came to take me to Camp Ho Ngoc Tau. On the way to Ho Ngoc Tau, which was about a thirty-minute drive, I asked them about my friend Jack. The lieutenant said Jack had been wounded while on a mission two weeks earlier, and he was
in a hospital somewhere. The lieutenant told me as soon as we got to SIGMA, I would get a briefing then I would be going to the forward launch site. He told me that I could get more information on Jack at the launch site. He said I would be assigned to the Recon Company and would be going on a mission as soon as possible because several missions were scheduled, and the Recon Company didn’t have enough people to pull them. He said the missions were in a really hot area, and the Recon Company had several casualties. He said they usually had eight Recon Teams, but they were down to four teams. Just my luck to come all this way to see Jack, and he wouldn’t be there.
I arrived at Ho Ngoc Tau on April 29, 1968. They drove me straight to the camp’s Tactical Operations Center (TOC). At the TOC, I received a briefing on the Area of Operations (AO) from the S-2 and a mission briefing from the S-3. The S-2 told me the AO was called War Zone C (Charlie), which was west of the Tay Ninh Province in South Viet Nam. Next, the S-3 started his briefing, and it was even scarier.  The S-3 told me that Project SIGMA was an unconventional warfare unit with a mission to conduct cross-
border long-range-reconnaissance into Cambodia to disrupt the North Vietnamese Army and the VietCong. He said the code name for our Area of Operations (AO) was “Project Daniel Boone.” Project Daniel Boone covered the eastern half of Cambodia, and everything we did in that AO was Top Secret. 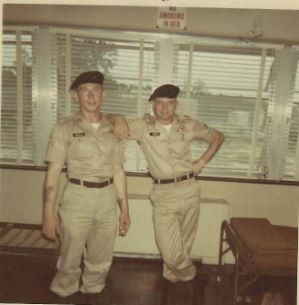 My friend Jack Martin and me in our room at Training Group. We don’t have our Flashes yet.

After the briefing, I had to sign more forms stating I would never talk about what I did while assigned to B-56 .  This was nothing like what I had been trained to do. However, it would be exciting if I survived it. The S-3 sent me to see the S-1. The S-1 took a photo of me to put in my personnel file, and then he sent me to the S-4. The S-4 gave me a rucksack full of ammo for an M-16 rifle, a compass, canteens, and two pairs of tiger-striped uniforms to wear on missions. The S-4 took me to the far north end of the camp, where a helicopter was waiting to fly me to the forward launch site. The S-4 took my bags and said I wouldn’t need anything in them until I came back to Ho Ngoc Tau. I hadn’t been in camp for two hours, and I was on my way to the war. My head was spinning now. While I was at B-56, each person told me their name, but everything was going so fast I didn’t remember any of them. However, I did see someone I knew from the Weapons course at Fort Bragg; it was Roy Benavidez. Roy said he was working for the S-3, and he was on his way to the forward launch site at Loc Ninh. 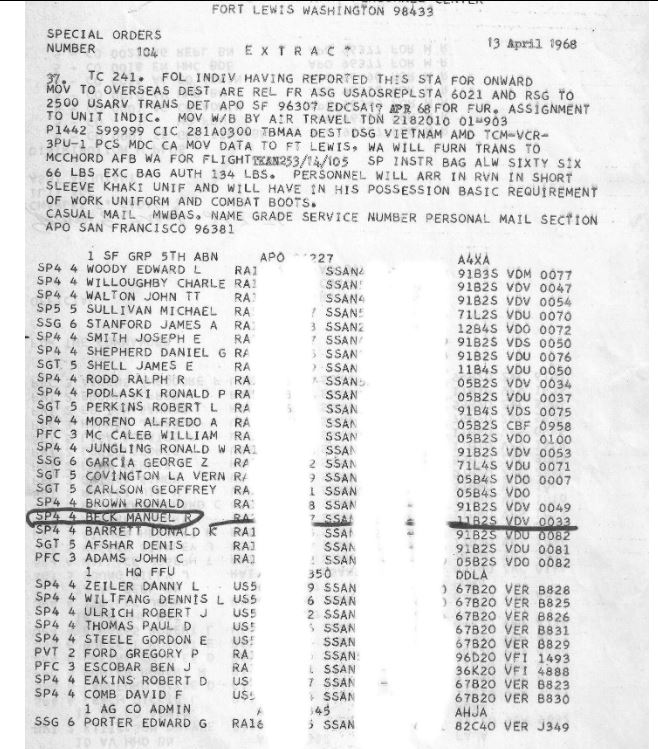