4. Fly the water buffalo back to Mai Loc.

Khe Sanh, was abandoned in July 1968. FOB-3 personnel being the last ones to leave. An overland movement in cattle trucks brought us to Mai Loc. Mai Loc was located East of Camp Carrol and South of Cam Lo. Other than a small RF/PF encampment there was no fortified positions. An engineer company arrived to build a dirt strip for us. As our convoy arrived one of the vehicles hit a land mine right in the village of Mai Loc. We found out later Mai Loc was a NVA R&R center. 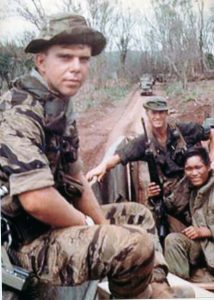 Kara Garland and Bob Abandon Khe Sanh
Early August we had limited supplies and equipment to feed ourselves and our Bru. That being the case every week or so there were food runs made to Quang Tri or Dong Ha. Rice and Buffaloes were purchased and since we had no freezers or refrigerators the buffalo s had to be kept alive until time to slaughter them.  The food run duty roster finally showed that I had the next assignment. I was told that one of our 101st Abn Hueys assigned to us would be available For me. I grabbed Bun Ba my teams 0-1 and we were off to Quang Tri. Arriving at Quang Tri we located the Vietnamese official who led us to this scrawny old farmer who had a large water buffalo with him. I handed him $400 dollars in Vietnamese Dong and the farmer started hog tying the animal with his homemade rope. With the help of numerous on lookers the buffalo was lifted into the Huey and strapped down. The helicopter crew was not too happy about this mission.
Bun Ba, Team Leader o fHF El Dorado, died in 2005 of TB 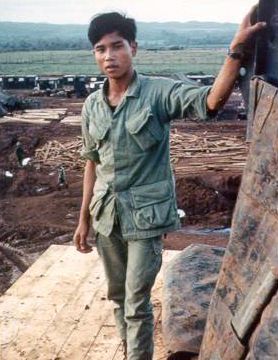 The Huey was started up and Bun Ba and I jumped in the back with our cargo. We climbed to around 1,000 feet and headed back to Mai Loc. Things were going along nicely until the buffalo got panicky and started moving around, even though he was strapped down, the homemade ropes holding his feet together started to become unraveled. Next the cargo straps started to loosen up and the movement of the animal caused the aircraft to rock back and forth. The animal was becoming loose, and the crew yelled at me to do something right as the thrashing buffalo drove one of his horns into the deck of the chopper. Bun Ba started yelling at me to shoot, shoot him. I took out my Colt .45 and fired at the buffalo’s head. The first shot ricochet off the head and through the side of the aircraft. The second shot entered his head and blood started flowing all over the place. Arriving back to Mai Loc Bun Ba and I with the help of the pissed off crew pushed the dead buffalo out of the helicopter. Damage to the aircraft was one hole in the floor from the buffalo’s horn, one .45 bullet hole through the side of the aircraft and blood all over the place.
After Action Brief:
#1 Bun Ba and I would scrub all the blood out of the Huey.
#2 All future Buffalo trips would be sling loaded
Facebook Twitter Pinterest linkedin Telegram
Newer How I got to B-56 Project SIGMA, Part I: by Manny Beck
Back to list
Older SOG Story: by Tony Love