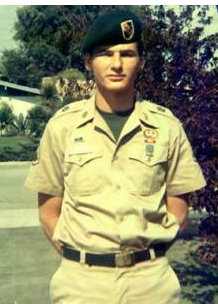 SYNOPSIS:  William Copley was born in Columbus, Ohio and joined the Army at age 18 in Los Angeles California.  When he went to Vietnam, after Special Forces training, he was attached to MACV-SOG (Military Assistance Command, Vietnam Studies and Observation Group), Command & Control North.  MACV-SOG was a joint service high command unconventional warfare task force engaged in highly classified operations throughout Southeast Asia.  The 5th Special Forces channelled personnel into MACV-SOG (although it was not a Special
Forces group) through Special Operations Augmentation (SOA), which provided their “cover while under secret orders to MACV-SOG.  The teams performed deep penetration missions of strategic reconnaissance and interdiction which were called, depending on the time frame, “Shining Brass” or “Prairie Fire” missions.

On November 13, 1968, SP4 Copley was serving as the assistant to the team leader on a reconnaissance patrol in Laos.  The patrol, together with an unspecified number of indigenous personnel, was ambushed 16 miles inside Laos west of Ben Het prior to establishing overnight positions.  SP4 Copley was wounded in the initial burst of fire.  The bullet entered his upper left shoulder and exited through the middle of his back.

A teammate, SSgt. Roger T. Loe, carried Copley on his back until he tripped after traveling a short distance, tried to administer first aid until
Copley’s face showed signs of death, and was forced to leave because of pursuit by hostile forces.

From November 13-15, a search team was in the area and attempted to locate Copley, but they were forced to withdraw on November 15th when they were ambushed.  (NOTE: Sources do not agree on the date of incident.  The U.S. Army shows date of incident as November 13.  The Army did not presume Copley to be dead/body not recovered, indicating that there is a chance that he was not dead when left behind.)