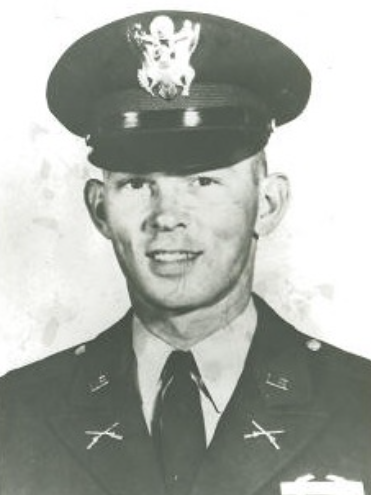 SYNOPSIS:  Capt. William “Ike” Eisenbraun was attached to the 17th Infantry regiment of the Seventh Division (“Buffalos”) when he fought in Korea. He was awarded a Purple Heart for wounds received in Korea. In 1961, Capt. Eisenbraun volunteered for duty in Vietnam because he believed in what we were trying to accomplish there. He was one of the earliest to go to Southeast Asia as an advisor to the Royal Lao and South Vietnamese Armies.

On his fourth tour of duty, Eisenbraun served as Senior Advisor, Headquarters MACV, SQ5891, U.S. Army Special Forces. He was at jungle outpost Ba Gia near Quang Ngai in South Vietnam when the post was overrun by an estimated 1000-1500 Viet Cong force. Newspapers described it as “one of the bloodiest battles of the war to date”. A survivor told newsmen the Viet Cong attacked in “human waves and couldn’t be stopped.” There were only 180 men defending the outpost. Captain Eisenbraun was initially reported killed in action.

Later, two Vietnamese who had been captured and escaped reported that Capt. Eisenbraun had been captured, was being held prisoner, and was in good health.  Through the debriefings of returned POWs held with Eisenbraun, it was learned that he died as a POW. One returned POW said that on about September 1, 1967, Eisenbraun fell out of his hammock (which was about five feet above a pile of logs) and landed on his right side. For about 5 days after the fall, Eisenbraun continued his daily activites, but complained of a severe pain in his side.
After that period he stayed in bed and at about 0100 hours on September 8, LCpl. Grissett awakened PFC Ortiz-Rivera and told him that Eisenbraun had stopped breathing.

Another POW said Ike had died as a result of torture after an escape attempt in 1967. Robert Garwood added that Ike had provided leadership for the prisoners at the camp, and was an obstacle to the Viet Cong in interrogating the other prisoners. He also spoke fluent Vietnamese, which made him a definite problem. Garwood and Eisenbraun had been held alone together at one point in their captivity, and Ike taught Bobby the secrets of survival he had learned in SF training, and in his years in the jungle. Bobby states that Ike knew and taught him which insects could be eaten to fend off common jungle diseases, and that he and Ike jokingly planned to write a cookbook called “100 ways to cook a rat”. Garwood said that Ike had been severely beaten following the escape attempt, and that one night he was taken from his cage and not returned. The next morning, Garwood was told that Ike had fallen from his hammock and died.