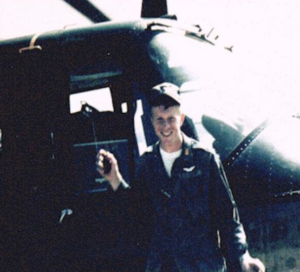 SYNOPSIS: WO Walter F. Wrobleski was the pilot of a UH1C gunship on an extraction mission in the A Shau Valley on May 21, 1967. He sighted the patrol he was to extract and other gunships accompanying Wrobleski established an orbit overhead.

Wrobleski was making a strafing run when it was hit by a burst from a heavy caliber machine gun, and the helicopter’s engine stopped. The aircraft immediately received more fire, causing it to go out of control and crash. It rolled down a ravine, and because of the intensity of enemy fire, other choppers could not get close enough to see if there were survivors.

At 3:57 p.m. the chopper exploded and started to burn. An Air Force search and rescue aircraft attempted to drop a paramedic team near the crash site, but were unable to maintain a hover to do so. Later, a Marine CH46 helicopter rescued one individual alive from the site. Subsequently, two other men from the incident were hoisted out under heavy enemy fire. Not realizing the two were on the lines, the aircraft, receiving fire, attempted to evade fire, dragging the hoist through the trees. The two men were knocked off the hoist.

Rescue aircraft continued to orbit the area and flashed signals to the ground. Those signals were answered from the recovery area and then from a light from the crash site. Because of the terrain and the short time between sightings, it was believed the signals could have been from the same individual.

On May 22, a Vietnamese Ranger company that had been inserted into the area located one of the individuals and had him evacuated by helicopter. The next day the Rangers located the other individual who walked out with them. Two American advisors who were with the Ranger unit made a thorough search of the wreckage and the surrounding area trying to find evidence of human remains. They believed at that time that the Viet Cong had not visited the site because of items they found that the Viet Cong would normally have salvaged.

No sign of Wrobleski was ever found. He was listed Missing in Action.