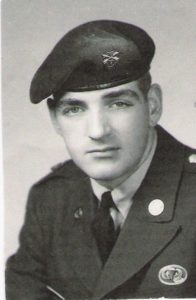 SGT Howard Bruce Carpenter, KIA (body not recovered) on March 6, 1967. SGT Carpenter, a commo man, was assigned to a Hatchet Force company at FOB-1, Det B-50 (Project Delta).
Circumstances of loss: On 6 March 1967 there was a firefight between a Special Forces team and an unknown sized enemy force resulting in one unaccounted-for American. On 5 March 1967, a CH-46 helicopter crashed attempting to insert a Special Forces Team. No one was killed or seriously injured in the crash. After the crash, the Special Forces team and helicopter crew established a defensive perimeter around the helicopter. They were attacked by an unknown sized enemy force the next morning and the Special Forces team member was killed. The remaining team members covered the body with a poncho and hid it 20 to 50 meters south of the helicopter crash site. On 7 March 1967, the Special Forces Team and helicopter crew were extracted, but were unable to recover the remains.
His story is best told by reading his Silver Star citation: For Gallantry in action while engaged in military operations against a hostile force in the Republic of Vietnam: Sergeant Carpenter distinguished himself by exceptionally valorous actions on 6 March 1967 while serving in the Special Forces as a radio operator on his units defensive perimeter during a Viet Cong attack. A probe of the perimeter by a group of twenty insurgents resulted in a firefight which left ten enemy casualties and three Americans wounded in the firing zone. When the Viet Cong withdrew to regroup, Sergeant Carpenter completely disregarded the danger of their presence and moved out to help the wounded. As he approached the two disabled men, he encountered several insurgents closing in on them. He rapidly killed two of the enemy and forced the others to withdraw, then carried one of the casualties to safety within the perimeter. Undaunted by his first encounter with the Viet Cong, Sergeant Carpenter left the perimeter to rescue the other man. Once more he found the insurgents closing in on the casualty and took them under fire. At that point his weapon jammed. Refusing to take cover and give up his comrade, Sergeant Carpenter fearlessly charged the Viet Cong and used his rifle as a club until he was fatally wounded by hostile fire. His selfless and courageous sacrifice saved the lives of two men in the face of attack by a numerically superior force at the cost of his own life.
Carpenter’s remains were checked by another team member and it was determined that he had died from the wounds he had received during the firefight. Because of enemy pressure in the area, the company was forced to leave Carpenter’s remains behind as they sought a more secure position.
SGT Carpenter was from Youngstown Ohio, unmarried and survived by his parents and brother Thomas. His family had deep military roots in America, dating back to the Revolutionary War. His older brother, Thomas, also served in the Army. SGT Carpenter’s family erected a monument in his memory at Poland Riverside Cemetery, Poland, Ohio. There is also a chapel and local bridge named in his honor.
Prairie Fire Report: On 3 Mar two HF’s infiltrated VIC GOLF-6 to exploit reported enemy activity and vehicular movement VIC Route 922 and
attempt recovery of the body of a U.S. member KIA with ST Alaska on 21 Feb. During the launch one of the helicopters was disabled on landing and had to remain in the area. The helicopter incident prevented full exploitation of enemy activity astride Route 922 due to emphasis being placed on recovery of the helicopter. Enemy pressure and unfavorable weather forced the HF’s to abandon the helicopter and disengage from the enemy. Enemy contact resulted in 4 (1 US [Howard Carpenter?] and 3 VN) KIA AND 8 (2 US and 6 VN) WIA. The HF’s exfiltrated 8 Mar.
close