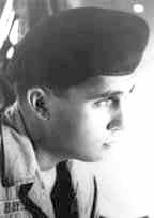 SFC Boyle was a passenger in an 219th Vietnamese Air Force Sikorsky CH34 helicopter (serial #554324), on a resupply and medivac mission supporting Hatchet Force Company B, Operation Halfback, in the tri-border area in Attopeu Province, Laos. LT Leonard L. Kinnard, SFC Robert Brinkmeier, and SP4 Lindon G. Lambert were aboard the helicopter when it landed at grid coordinates YB568188, 1 kilometer northwest of Ban Pakha, near the village of Ban Xai Den.

SFC Boyle had just completed loading five wounded and one KIA indigenous personnel into the aircraft. As the helicopter began to liftoff, it was hit by B-40 rockets and machine gun fire, causing an explosion and subsequent fire. The force of the explosion was so powerful that it ripped the cockpit from the cabin of the ship, allowing the pilot and co-pilot to escape.

Just prior to rocket impact SFC Boyle was observed working on patients inside the helicopter cabin and was apparently trapped inside the aircraft and burned with it. The wrecked remains of the helicopter and surrounding area were checked thoroughly once the wreck cooled down. Searcher found the door gunner, blown out of the ship by the explosion and two other indigenous personnel. The wreckage, which was burned to ash, and surrounding area were searched several times but the body of SFC Boyle and other indigenous troops could not be found.

William Boyle was listed as Killed in Action – Body Not Recovered. His family placed a memorial marker for him in Knowlton Cemetery, Tioga County, Pennsylvania. He was survived by his mother, Mrs. Mary J. Rippe (15 Aug 1907 – 21 Jul 1997), wife Mrs. Joyceen Boyle, and son John P. Boyle; and preceded in death by his father Michael Boyle.

Later, two MIA recovery teams in Oct 1995 and Jun 2001 investigated several lost aircraft sites in the vicinity. They found the old village abandoned, but local farmers and translators led them to several crash sites. One site matched the recorded description of the incident, but no retrieved numbered helicopter parts matched SFC Boyle’s CH34 helicopter for confirmation. No personal effects or bodies were located. 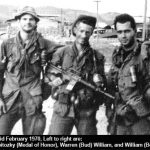