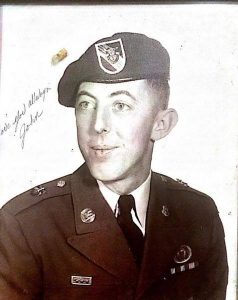 The following is an account of the operation on which SFC Bean lost his life provided by Steve Feldman: The operation lasted from November 25-29, 1970. SFC Bean was killed in the morning of the 29th before the extraction. He was awarded the Purple Heart and the Silver Star for his actions during the operation. The operation is officially listed as a search and clear operation. The platoon was sent into the area to determine what was there. In early November a reconnaissance team was sent into the same area. On the first day they ran into a company sized NVA unit which tried to capture them. The NVA used bull horns and fired RPG’s over their heads in an effort to capture them rather than kill them. My platoon was sent in (to the same area again) to find out what was really there. We made contact on our first day. The conversation that the NVA unit had just prior to the initiation of combat was they were expecting a recon team. The platoon was in and out of combat every day during the operation. Besides large cashes of rice and other food the platoon discovered a bomb making factory late in the day of the 28th that was 20 meters wide by 50 meters long. Slightly after the discovery of the factory an NVA company made contact and chased the platoon until dark. During the night the platoon hid by staying in a river with the search being conducted on both sides of the river. Intelligence determined that we probably ran into the 66th NVA Regiment. All members of the platoon were wounded and there were 5 Montinards killed as well as SFC Bean. Another Sergeant on the operation was awarded the DSC. After the extraction an Arc Light (B-52 strike) was done the same day. SFC Bean’s body was escorted to the United States by 2LT Robert Noe on December 7, 1970. (By Steve Feldman)