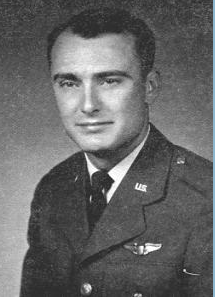 SYNOPSIS: Bob Rex had a bright future when he graduated from the Air Force Academy in 1964. He was both coach and player on the Academy soccer team, and was affectionately known throughout the Wing as “Oed”.

Captain Rex and Army Staff Sergeant Tim L. Walters were the pilot and observer aboard an O2A aircraft (serial #67-21425) on a combat support mission when it crashed for unknown reasons about 5 miles into Laos west of the DMZ on March 9, 1969. Walters was from Special Operations Group, MACV. The O2A was a two-place observation plane which flew forward air control, marking targets, locating friendly troops, and directing air strikes.

At first, the enemy feared the presence of the small observation planes, knowing that they were able to bring in fighter planes. Later, however, it became more commonplace for any enemy group that believed it had been sighted to open fire and try to bring down the FAC and reduce the accuracy of the impending strike.

The crew of these small unarmed crafts had a dim hope of survival if hit because of their close proximity to the enemy and lack of ability to eject at high altitude and drift out of the area. The planes were light, however, and flew low, so survival was not out of the question. Additionally, the enemy developed weaponry that could knock out the engines only, allowing the plane to arrive on the ground with far less damage.

After Rex and Walters’ aircraft crashed, another aircraft (call sign Knife 55), reported that the aircraft crashed at about 1150 hours. A ground team inspected the wreckage and reported that both the occupants were dead. However, hostile ground fire prevented them from recovering the remains. Two members of the ground team did not personally know SSgt. Walters, but stated that both individuals were positively dead. An aircraft engine was on top of the NCO (Walters). The ground team recovered the weapons, map case and camera from the aircraft, but because of hostile ground fire, left the remains behind.

The U.S. Department of Defense categorized Bob Rex and Tim Walters “Killed in Action, Body Not Recovered”, yet the U.S. State Department, using Defense records, coded the demise of Walters as “died while missing” and Rex as “hostile – killed”, indicating that there was a probability that the aircraft was shot down, rather than downed through some malfunction or pilot error. Certainly, there is a very high probability that the enemy knows the whereabouts of Bob Rex and Tim Walters.

The U.S. has approached the Lao only in recent years (mid to late 1980’s) for cooperation in examining crash sites of downed aircraft. While the product of these searches have yielded remains of some missing men, they have also resulted in what many call “voodoo forensics” whereby men are identified from bone fragments non-government experts claim are unidentifiable. Several POW/MIA families have successfully brought suit against the government for these faulty identifications.

Even more tragically, reports relating to missing Americans continue to flow in, convincing many authorities that hundreds of Americans are still alive in Southeast Asia, waiting for their country to secure their freedom, yet the U.S. maintains they have no actionable evidence and take no action to free them.

Rex and Walters, according to the search team, died the day their aircraft went down in Laos. Until their remains are returned, we are abandoning them to the enemy.