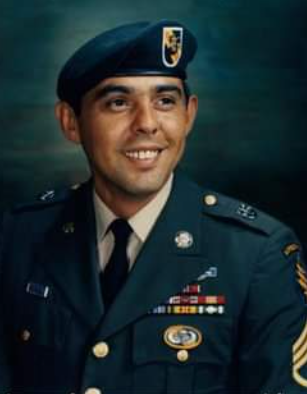 SYNOPSIS:  SFC Ricardo G. Davis was born in Ft. Stockton, Texas. After he reenlisted in the Army in 1967 at Fort Campbell, Kentucky, he was sent to Vietnam and assigned to Command & Control North, MACV-SOG (Military Assistance Command, Vietnam Studies and Observation Group). MACV-SOG was a joint service high command unconventional warfare task force engaged in highly classified operations throughout Southeast Asia. The 5th Special Forces channelled personnel into MACV-SOG (although it was not a Special
Forces group) through Special Operations Augmentation (SOA), which provided their “cover” while under secret orders to MACV-SOG. The teams performed deep penetration missions of strategic reconnaissance and interdiction which were called, depending on the time frame, “Shining Brass” or “Prairie Fire” missions.

On March 20, 1969, SFC Davis was the team leader six-man reconnaissance team was operating in Saravanne Province, 11 miles inside Laos west of Kham Duc when the patrol was attacked. Sgt. James C. LaMotte was two feet away when Davis was hit by rifle fire in the upper chest and face and said, “Jim, Jim!”, and fell. One of the team members approached Davis two minutes after he fell and removed Davis’ weapon and ammunition belt and reported that Davis was covered with blood. The assistant patrol leader advanced to Davis’
position seven minutes later, and checked Davis’ pulse and respiration, but could detect no signs of life.

The patrol was forced to evacuate the area because of advancing hostile soldiers and impending U.S. airstrikes on the area. Ricardo Davis was not seen again. No further searches of the area where he was last seen was possible because of the air strikes and the fact that this territory was held by the enemy from that day forward. He was classified Missing In Action by the U.S. Army. He is one of nearly 600 Americans who disappeared in Laos during the Vietnam War.

Although Davis was seriously wounded, there apparently was some question as to whether he was dead, because the Army did not place him in Killed/Body Not Recovered status. Due to the close proximity of enemy forces, it is strongly believed that the Lao could account for him. While evidence mounts that Americans are still alive in Southeast Asia, one must wonder if Ricardo Davis is among them.