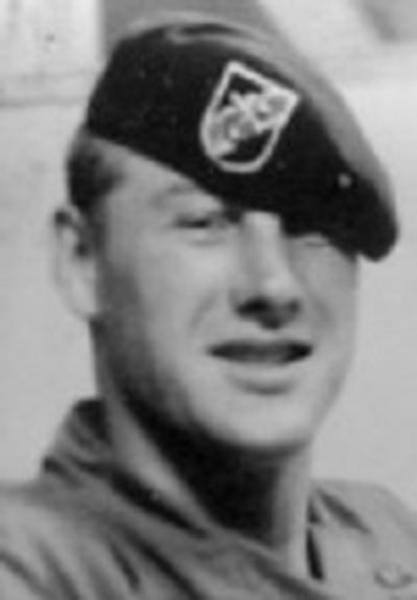 SP5 Randolph V. Rhea was Special Forces-qualified Infantry Operations and Intelligence Specialist assigned to Command and Control Central (CCC), Military Assistance Command, Vietnam–Studies and Observations Group (MACV-SOG), 5th Special Forces Group. On November 12, 1969, an enemy mortar attack occurred on the Special Forces camp at Dak Pek in Kotum Province, RVN. Some of the 82mm rounds impacted along the short runway, scattering the Allied aircraft parked there. American AH-1G Cobra helicopters spotted the mortars on a facing hillside and attacked the position, ending the bombardment. It had not lasted more than two minutes. Personnel who had been on the runway got up, dusted off, and looked around. On the tarmac one man still lay there. It was SP5 Rhea. Two men rushed to him, turned him over, saw no wound, but he was dead. A medic examined more closely and found a pinpoint in his chest where a splinter of a mortar fragment had entered and penetrated his heart. Rhea got hit because, instead of running for cover, he had run in the open to help a pilot. For his efforts, Rhea was posthumously awarded the Silver Star for bravery. [Taken from coffeltdatabase.org and the book “Secret Commandos: Behind Enemy Lines with the Elite Warriors of SOG” by John L. Plaster