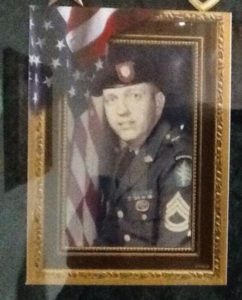 Rest in Peace: Sergeant First Class Linwood Dwight Martin was a 12-year veteran from Bassett, VA. He was 30 years old and had a Military Occupational Specialty (MOS) of Radio Operator. He had started his tour in Oct ‘67. In addition to the DSC, he had a Bronze Star for Valor award. SFC Linwood Dwight Martin is buried in Sherwood Burial Park, Salem, Salem City, Virginia, USA.  His name location on THE WALL is Panel 45 E, Line 59.

B-50 veteran 1LT Jon Potter remembers SFC Linwood D. Martin was a rarity in the Special Forces – he was a “Leg” – not airborne qualified. Martin was part of the B-50 bunch that 1LT Delbert Rasmussen took to FOB 2 for cross-border recon training in Fall ‘67. We do not have the records with particulars about the 22 March 1968 B-50 Omega In-country Recon mission comprising of SFC Linwood D. Martin, MSG Estevan Torres, and SP5 John C. Wells, except for the excerpt of SFC Martin’s Distinguished Service Cross citation, “…Sergeant First Class Martin distinguished himself by exceptionally valorous actions on 03/22/68 as team leader of a small Special Forces long-range reconnaissance team operating in enemy controlled territory.  On 21 March, his patrol discovered a freshly dug enemy bunker and tunnel complex.  SGT Martin thoroughly reconnoitered the area and then moved his men to a night defensive perimeter.  During the night, an unknown size Viet Cong force closed on three sides of the friendly position and, at daybreak, raked the team with heavy automatic weapons fire. Braving the withering fusillade, SGT Martin fearlessly led his troops through the enemy’s flank without a casualty and quickly established a hasty defensive perimeter on a ridgeline to await helicopter extraction. The Viet Cong pursued the team, completely surrounded it and unleashed a savage attack, determined to annihilate the trapped soldiers. Directing his men to hold their positions, SGT Martin gallantly charged down the ridge and sprayed the advancing insurgent ranks with fierce rifle fire, killing many of the Viet Cong. Before his team members could come to his aid, SGT Martin was over-powered by the enemy force and mortally wounded. His dauntless and courageous efforts enabled the rest of the patrol to hold off the enemy until helicopters arrived and extracted them to safety.” (Per RV GO# 68/1842, dtd 04/20/68.)

{Ed. Note – The Virtual Wall data shows Torres was evidently killed in a helicopter crash, yet these men were all in the same action according to their standing in THE WALL locations. They were obviously on the same RT and same helicopter. THE WALL information shows Torres was in a “Helicopter, non-crew, Air Crash over land”. Martin’s DSC says they got extracted to safety. But his Virtual Wall data sheet shows he as a ground casualty in Binh Dinh Province or across its Cambodian border. Evidently, they lifted off the LZ with Martin being mortally wounded and their helicopter was hit badly enough to crash somewhere en route back to their base. Torres was listed as being in Det. B-56 Project Sigma. Torres was promoted posthumously to E-7 MSG.}

I was an Army FAC from the 185th Recon Airplane Co in Ban Me Thuot, sent to FOB 2 in Kontum, TDY from 26 Feb 68 until 17 May 68 along with another Army O-1 pilot to support FOB 2 operations.
On the morning of 21 Mar 68, I was assigned to take SFC Martin, the one-zero of Recon Team Delaware, over his AO (area of operations) to find a suitable LZ (landing zone) and an alternate for his team’s insertion later that day. We returned to FOB 2 and later ended up in the shower room together. We had a rather extended visit and got to know each other in a short time. Late that afternoon I flew cover over RT Delaware’s insertion until almost dark and returned to Kontum, landing with jeep headlights at each end of the runway. The runway lights had been inoperative since the TET Offensive.
Early the next morning, I took off with a SF Captain, whose name I can’t remember, in my backseat to check on Team Delaware. Upon arrival in their general area, we got a frantic call from the team one-one, SSG Terry Dahling, requesting an immediate extraction. Read his account of what was happening on the ground.
The Captain got on one FM radio starting the wheels turning for the extraction, I on the other FM asking if there was artillery in range and on my UHF radio asking for fighters (“fast movers”) to put in an airstrike. I had 2 HE rockets and 2 White Phosphorus (“willy pete’s) and after determining the teams location, made a pass or two firing the HE’s at the enemy positions in a feeble attempt to take a little pressure off. When the fast movers arrived I marked possible targets with WP for at least one flight of F-100’s and possibly two. Huey Gunships were there, maybe before the fighters, busy time, don’t remember the order.
As I remember, during the extraction, SFC Martin’s body and part of the team were loaded on the first Huey (“slick”) and in the process a fire extinguisher was triggered. As the pilot lifted off, the cockpit filled with smoke and he thought he had been hit and was on fire. There was an open area, recently burned off, just across the river which he pitched into and in the rotor wash all the black ash and debris made the Huey disappear and from above we thought he had crashed. Suddenly, he pulled out of the black hole, radioed he was ok, and joined the other three slicks returning to FOB 2.
We stayed around for as long as fuel allowed to harass the NVA (the O-1 normally had fuel for 4 hours) and landed in Kontum after 4:15, on fumes. RIP Linwood.

SFC Linwood D. Martin was the team leader of Recon Team Delaware from Command and Control Central (CCC), MACV (SOG). The following is an eyewitness of his final mission: “SFC Martin was the 1-0 and I the 1-1 on an operation which commenced on March 21, 1968. The team was Delaware and there were 9 Montagnards (indigenous soldiers) on the team. The operation was a recon of an area in country. It was requested by the commanding general of the 4th Infantry Division since his LRRPS were incapable. We were inserted in the afternoon and everything was more or less uneventful. We were looking for a road/train and possible crossing point of a medium-sized river. Around 1700 hours we came upon a classic high-speed trail. It was about 4-6 feet wide and smooth and clean. We also found some fresh bunkers looking over the trail and river. While the indigenous soldiers got water, I found some “rabbit holes” dug into the bank. These rabbit holes were squared off, apparently man made. It was getting late so we decided to pull back and observe the trail overnight. One of the yards planted a toe-popper (anti-personnel mine) on the trail. We heard the mine go off and decided to pull further into the jungle. One NVA happened upon us. We killed him and a small fire fight ensued until we could break contact and pull as far into the jungle as possible to RON (remain overnight). All night the NVA probed and threw rocks and sticks trying to get us to betray our position. In the morning they started making noise, beating sticks, blowing whistles, etc. They had us surrounded on three sides with the river being the fourth side. Martin and I discussed the situation and decided that the best course of action was to slip through a flank, rather than go where they were pushing us. We managed to evade without a shot being fired. Linwood decided to go back to the bunker complex and take pictures. I was dead against it. My every instinct said not to return to the hornet’s nest we had just left. I said that if they wanted pictures I’d draw some foogin’ pictures. Martin, being the 1-0 prevailed. Upon arrival at the bunkers we found the shoe of the individual who had stepped on our mine. It still had the foot in it along with a letter from home. We were just getting situated and setting up a perimeter when we took a high volume of fire. I was face to face with Martin and a round from the first burst hit him over the left eye. I was going to apply a dressing but when I reached behind his head it was obvious he was gone. I immediately panicked and started screaming on the radio. After a few minutes I realized the antenna was laying on the ground. I set it up and got Covey and we declared a Prairie Fire Emergency. We couldn’t go back into the jungle so we pulled into a clearing and set up a “wagon spoke” perimeter with me in the middle. I imagine we looked like Custer and his last stand from the air. We were in the center of a football sized field. We couldn’t go anywhere but the NVA had to cross the open to get to us. This exposed them to close air support and ground fire from us. I got support from gunships as well as 2 F-100 Super Sabres. The F-100’s had napalm and I for one liked it at the time. My standard correction was: ‘Put it in the same place but on the other side.’ After three attempts they finally managed to extract us. I grabbed yards by the collar and seat and literally tossed them into the choppers. After we lifted off, the crew chief wanted to know who was on the first ship. I asked him why and he said it had gone down. My stomach turned flips and I could see the looks on the yards faces. However, we found out the ship hadn’t been shot down. One of the indig caught his gear on an extinguisher and the crew saw the smoke and thought they were hit. They unloaded, realized the ship was OK, reloaded and joined us.” (Story by Terry Dahling) [Taken from macvsog.cc] 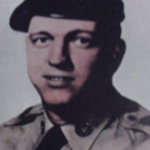 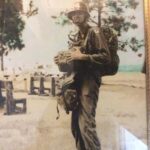