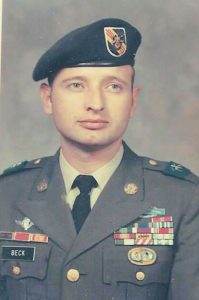 Manuel R. Beck (Manny) was born in Oklahoma City, OK, in 1943. He served in the Army and the Oklahoma Army National Guard (OKARNG) for 43 years. He enlisted in the OKARNG in 1960, at the age of 16. He served with 45th INF Div for six years. In 1966 he left the guards and enlisted in the U.S. Army and went straight to Jump School and then on to Special Forces Training Group at Ft Bragg, NC. After completing Training Group and the Light and Heavy weapons courses, he was assigned to Co B 3rd Special Forces Group.
In 1968 he requested an assignment to the 5th Special Forces Group and was assigned to B-56, 5th SFG Project SIGMA, later called MACV-SOG CCS. He served as a 1-1 and 1-0 on recon teams One, Two, Three, and Four. After six months pulling Recon mission, he was sent to the first Combat Reconnaissance Team Leaders Course (One Zero) school in
Bear Cat, South Viet Nam, and that was from October 3 to October 22, 1968. He was one of two honor graduates of the first One Zero School, and the other was SFC Gunther Wald. One of his instructors was SFC Jim Bolen.  After returning to SIGMA, Sergeant Major Schumacher took him out of the Recon Company and put him on special assignment working with and training a new Spike Team. Sergeant Beck would have twelve SCU soldiers and a South Vietnamese Army
Special Forces captain assigned to him for the next few weeks. The idea was to allow the South Vietnamese Army to take over the Recon missions with our SCU soldiers as team members. This was something new SOG was trying, sending in an all-indigenous team on Recon missions.
After several weeks of training, the Spike Team was ready for their mission. Sergeant Beck was then assigned to the First Company (Cambodian Rifle Company) in December 1968. In January 1969, he was assigned to Captain Dennis M. Hirsch to assist in moving B-56 Project SIGMA from Camp Ho Ngoc Tao to B-50 Project OMEGA at Ban Me Thuot to form Command and Control South CCS. From March to May 1969, Sergeant Beck was Captain Hirsch’s First Sergeant in the
Defense Company. From May to November 1969, Sergeant Beck was assigned to MACV-SOG OP-35 as the O&I NCO for Colonel Jack Isler.
After separating from the Army on November 1, 1969, he resumed his military career in the OKARNG. In 1979 he was accepted to Warrant Officer School and Helicopter Flight School at Ft Rucker, AL. He served as a pilot for 13 years and attained the grade of CW3. He was a pilot for the only Special Operations Aviation Battalion in the National Guard. In 1991 he was medically disqualified from flying duty, and he resigned his commission and reverted to his old grade of SFC E-7. In 1996 as an MSG E-8, he went to the U.S. Army Sergeants Major Academy in Ft Bliss, TX. After graduation, he was
promoted to CSM E-9, and was assigned as the Command Sergeant Major of his old Aviation Battalion. In 2001 he was assigned to the 45th Support Group as their CSM.  In March 2003, his unit was called to active duty. While on active duty, Sergeant Major Beck was forced to retire when he turned 60 years old in October 2003.
Also, after separating from the Army in 1969, he went to work for the Oklahoma City Police Department as a police officer. He served as a patrol officer on the streets for three years and a helicopter pilot in the air for the next 27 years. He retired from the OCPD Air support Unit as a lieutenant in 1999. Manny currently resides in Oklahoma City, OK, with his wife of 56 years, Shirley. He has a daughter Cindy, a son Ronnie, a daughter Amy, nine grandchildren, and four great-
grandchildren. His son Ronnie is a Colonel in the OKARNG
close