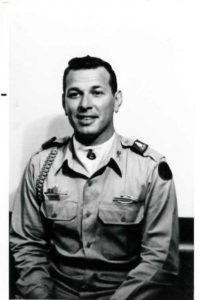 LTC Robert Lopez, FOB-1 Commander, who was KIA (body not recovered) on 6 March 1968 in Thua Thien-Hue Province, Republic of South Vietnam. Also lost with LTC Lopez was USMC pilot Major William H Seward, member of Aviation Branch, Ops32 (Air Studies Branch). The men were aboard a CH-46 Boeing Sea Knight Cargo Helicopter, the lead helicopter of a flight of two CH-46’s that were supporting the attempted insertion of a six man SOG recon team. It was reportedly the second insertion mission in the area and was approached with security concerns. The mission required the employment of a hoist to insert the ground forces through the triple canopy trees which were over 100 feet tall into a small opening on the side of a mountain. Previous teams had reported seeing North Vietnamese Army (NVA) Russian AN aircraft flying down that part of the valley at night delivering supplies and picking up wounded NVA or allied prisoners. While hovering above the jungle canopy, their aircraft started receiving enemy fire, started to descend and fell to the earth, exploded, and burned. Both Seward and the co-pilot were helplessly trapped in the twisted wreckage of the cockpit. The personnel who were able to get out of the burning aircraft (rear cabin crew and passengers) succeeded in freeing the co-pilot. MAJ Seward was unconscious and trapped in the opposite side of the cockpit. Every effort to free him failed. LTC Lopez appeared to be trapped between the aircraft and the ground, and efforts to free him were useless. Two hours later a recovery team arrived on the site, found the aircraft, and determined the personnel to be beyond recovery at that time.
In July of 1993 the 24th Joint Field Activity Team investigated what was referred to as (REFNO 1077) in Phu Thuong Village, Tua Thien-Hue Province. The JFA was a joint United States Socialist Republic of Vietnam operation developed to investigate possible MIA sites. The team interviewed one witness who provided first hand information on the crash site. The witness, Mr. Hoc, stated he was searching for aircraft crash sites to salvage metal in 1983 when he discovered a helicopter in the reported location of MAJ William Henry Seward’s aircraft. The witness showed the team the location of the aircraft where he had located and reburied one piece of human remains. He retrieved one long bone fragment and turned it over to the team. Mr. Hoc also reported that an eyewitness to the actual firefight in 1968 was present when he found the aircraft. Mr. Nguyen Hai Hieu was subsequently interviewed. He stated that he was bird hunting in the vicinity and actually saw the helicopter shot down. He observed several individuals in the post crash aircraft, three of whom appeared to be Americans. In August 1994, during the 31st Joint Field Activity Team investigation, a follow up search of the original crash site and recovered more remains, articles from the aircraft which could be identified as belonging to a CH-46A Helicopter including the aircraft data plate of MAJ Seward’s aircraft. The additional recovered remains were escorted to Hanoi where they were selected for repatriation to the United States. Custody of the remains was transferred to United States Officials at Noi Bai Airport in Hanoi on 4 October 1994. They were sent to the United States Army Central Identification Laboratory in Hawaii. On 28 February 2000, the Scientific Director of the United States Army Central Identification Laboratory determined the remains to be that MAJ Seward and LTC Lopez. This was certified by the Commanding Officer of the United States Army Central Identification Laboratory on 2 March 2000.
LTC Lopez and MAJ Seward are buried together at Arlington National Cemetery.
close