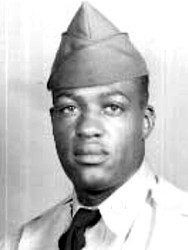 With Great Respect – Rest In Peace: SFC LeRoy Norris Wright. LeRoy Wright was a 16-year veteran whose home of record was Newark, NJ. He started his RVN tour on 02/24/68 and was 38 years old when killed by hostile multiple fragmentation wounds. His wife Heja and his sons Dorian and Darryl survived him. He is buried in Monmouth Memorial Park, Tinton Falls, Monmouth County, New Jersey.  His name location on THE WALL is Panel 54E Line 22.

On May 2, 1968, a B-56 Recon team lead by Sergeant First Class LeRoy N. Wright was assaulted by North Vietnamese Army (NVA) troops. According to “Compromised, Fight to the Death” written in memory of Wright’s Team, SFC Wright led a 12-man team composed of three Americans (himself, SSG Lloyd Mousseau, and SP4 Brian O’Connor), two ARVN officers, and at least seven CIDG (allied) troops. “His mission was to capture a North Vietnamese Army truck and return with the truck to Vietnam with a load of supplies as physical proof to the world press that the Viet Cong and North Vietnamese Army were being supplied through Cambodia.”  The team was inserted by helicopter into an area thoroughly controlled by the NVA, the Cambodian “Fishhook” area. (See Maps).  Shortly after insertion, the team encountered two NVA troops and killed both – but not before one of the NVA got off a shot, thereby warning his comrades. Wright’s team continued, but then encountered and in a brief but noisy fight killed (without injury to themselves) a 12-man NVA patrol. An emergency extraction was initiated, but helicopters from the 240th AHC came under fire about five miles before reaching the pick-up zone and suffered damages and wounded crew. They had to turn back to base with one gunner killed and the other wounded. “Only one lone slick made an approach to the pick-up zone, and it was misdirected by its C&C aircraft to land in a pickup zone that was controlled by enemy troops. LeRoy Wright watched from about 100 meters away in horror as an NVA stepped into the landing zone and directed the helicopter with hand signals to a landing spot, and its doom. Wright’s only recourse was to open fire immediately on the NVA beside the helicopter. Fortunately, the slick escaped this trap, but now the enemy knew exactly where Wright and his team were, and they attacked him in force. Soon hundreds of NVA troops surrounded Wright’s position and they became locked in a fierce firefight.”  As Wright redeployed his team, “he was hit by enemy fire and lost the use of his legs.  Then two enemy grenades fell between Wright and his teammates, …Wright threw one grenade back at the enemy, but only had time to roll his body onto the second grenade before it exploded…. Wright survived this explosion and fought on for a time firing his weapon until he was killed by a shot in his head.”

“The President of the United States of America, authorized by Act of Congress, July 9, 1918 (amended by act of July 25, 1963), takes pride in presenting the Distinguished Service Cross (Posthumously) to Sergeant First Class LeRoy Norris Wright (ASN: RA-51032309), United States Army, for extraordinary heroism in connection with military operations involving conflict with an armed hostile force in the Republic of Vietnam, while serving with Command and Control (Central), Detachment B-56, 5th Special Forces Group (Airborne), 1st Special Forces. Sergeant First Class Wright distinguished himself by exceptionally valorous actions on 2 May 1968 as team leader of a twelve-man Special Forces/Vietnamese reconnaissance patrol on an operation in hostile territory. Shortly after landing, his team spotted three Viet Cong soldiers. Immediately leading his team in evasive maneuvers, Sergeant Wright attempted to continue his reconnoiter. When the team made light contact with the enemy and the mission was completely compromised, he moved the patrol to a landing zone and called for an extraction helicopter. Savage enemy automatic weapons and small arms fire was directed at the team by a numerically superior enemy force. Sergeant Wright deployed his troops in a tight defensive perimeter and called for air support. Then, braving a hail of enemy bullets, he maneuvered his men toward the approaching rescue ship. The aircraft was driven off by an intense hostile fusillade that killed one door gunner and wounded the other. Sergeant Wright was also wounded by the ravaging barrage, but he completely disregarded his personal welfare and exposed himself to the savage fire to lead his force to a more secure position. The determined attackers closed in on the team and showered hand grenades on its position. Seeing a grenade land near one of his men, Sergeant Wright shouted a warning and dove between the soldier and the enemy explosive, absorbing the bulk of the blast. He was killed while selflessly placing the safety of a fellow soldier above his own in the heat of battle. Sergeant First Class Wright’s extraordinary heroism and devotion to duty, at the cost of his life, were in keeping with the highest traditions of the military service and reflect great credit upon himself, his unit, and the United States Army.”  (DSC citation, USARV GO#2878, dtd 06/17/68. ) 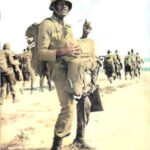