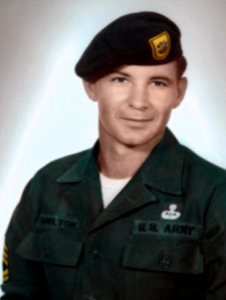 Gilbert Lee Hamilton was born on December 26, 1936. According to our records Colorado was his home or enlistment state and Denver County included within the archival record. We have Denver listed as the city.

He had enlisted in the United States Army. Entered the service via Regular Military. Served during the Vietnam War. He began his tour on August 21, 1967. Hamilton had the rank of Sergeant First Class. His military occupation or specialty was Radio Operator. Service number assignment was 26244416. Attached to Special Forces, Recon Team North Carolina, 5th Special Forces Group.

Gilbert Lee Hamilton is buried or memorialized at Fort Logan National Cemetery, Denver, Denver County, Colorado. This is a National American Cemetery administered through the Department of Veteran’s Affairs.