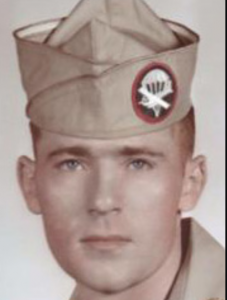 On April 22, 1961, a four-man team from the U.S. Army 7th Special Forces Group was operating alongside the 6th Bataillon d’Infanterie (Lao) north of Vang Vieng, Laos, when it came under a heavy artillery barrage from the Pathet Lao, a group of Laotian communist fighters, at Phou Tesao. The Pathet Lao quickly overran the battalion and the Special Forces team’s commander was captured. The sole survivor of the four-man team reported that he last observed his two other team members jumping into an armored vehicle in their effort to avoid capture. As the vehicle took off heading south on Route 13 toward Vang Vieng, it came under enemy attack, and the two team members riding on it were killed.

Sergeant Gerald Mack Biber entered the U.S. Army from Nebraska and was a member of Company B of the 7th Special Forces Group, 1st Special Forces Command. He was the radio operator in this field training team, and he was killed while riding in the armored vehicle. Attempts to locate or identify his remains following the incident have been unsuccessful.

The men were part of Capt. Walter Moon’s four-man Field Training Team FTT-59, MAAG, of the 7th Special Forces Group and was attached to the 6th Bataillon d’infanterie (Lao) at Ban Pha Home, about thirty miles north of Vang Vieng.

On April 22, 1961, the battalion was subjected to a heavy and accurate artillery barrage and was rapidly flanked at Phou Tesao. Shortly after the battalion commander announced that they were cut off, the perimeter collapsed and the Pathet Lao quickly overran the battalion positions.

The team’s commander, CAPT Walter Moon, was captured in the initial attack. SFC John M. Bischoff (the medic), SGT Gerald M. Biber (the radio operator), and some Laotian soldiers jumped aboard an armored car, heading south on Route 13, in a breakout effort. According to Lao survivors, they crouched behind the turret, but the car came under heavy grenade attack. SFC Bischoff fired a machine gun from the vehicle until he was shot through the neck and killed. SGT Biber had already been wounded and was apparently killed by stick grenades thrown against the armored car. The vehicle was halted and its crew captured.

SGT Orville R. Ballinger, demolitions sergeant, escaped through the jungle and linked up with some Lao soldiers. They found a boat and were going downriver when they were surprised and captured by the Pathet Lao seven days later. SGT Ballenger were eventually released in August 1962.

CAPT Moon tried to escape twice during his confinement, and on the last attempt was wounded in the chest and head. According to Ballinger, Moon’s head injury caused him to become mentally unbalanced, and after several months of persecution, he was executed in his prison quarters at Lat Theoung by a Meo guard and a Pathet Lao officer on July 22, 1961.

The Pathet Lao consistently denied knowledge of Moon, Biber or Bischoff after the war ended.

In 1984, James “Bo” Gritz, a highly decorated former Special Forces colonel, brought documents and a photograph pertaining to Moon from Laos and gave them to the U.S. Government. Moon’s wife positively identified the photograph and Moon’s signature. The Government stated that the photograph was made May 6, 1961, two weeks after Moon’s capture. (Moon was normally clean-shaven but had, according to USG, grown a full beard in 2 weeks!)

Though the documents were taken from a large collection of 250-300 similar documents held by the Lao People’s Army in Laos, the U.S. refused to demand the information from the Lao. The Defense Intelligence Agency, according to Congressman Stephen Solarz, has full knowledge of this collection.

Whether Biber and Bischoff survived the ambush on April 22, 1961 is unknown. They and Moon are among nearly 600 Americans who disappeared in Laos and did not return. The treaty which ended American involvement in the war in Southeast Asia did not pertain to the prisoners held by the Lao, and not a single prisoner was released from Laos in 1973. The Lao publicly stated they held prisoners, but the U.S. has never negotiated for their release.