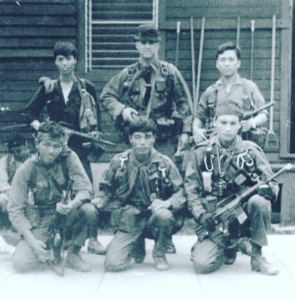 Garry served in the Phoenix Program during the Vietnam War and was one of the most respected recon men and FAC Riders in Command and Control North (CCN), Military Assistance Command Vietnam Studies and Observations Group (MACV-SOG). Garry was born March 24, 1947. He entered the Army on September 12, 1967. After nine months of enlisted service, he attended Artillery Officer Candidate School, Airborne School and the Special Forces Officers Course. Garry spent 5 years and 4 months on active duty, of which 2 years and 7 months were with Special Forces in Vietnam.
Not much is known about Garry’s participation in the Phoenix Program, designed and coordinated by the United States Central Intelligence Agency (CIA) and involving cooperation between American, South Vietnamese and Australian militaries. The CIA described it as “a set of programs that sought to attack and destroy the political infrastructure of the Viet Cong”.
Within MACV-SOG, Garry was a legendary figure among a collection of unique individuals. Garry was usually the only American on his missions with three former North Vietnamese Army turncoats as his team members. His team, Recon Team (RT) Asp, wore NVA clothing equipment and weapons and was universally regarded as one of the finest recon teams in SOG. Garry’s planning, preparation and audacity were exemplary. At 0400 on September 9, 1970, adding Bob Ramsey as his Assistant Team Leader along with two of his Vietnamese teammates, Garry led RT Asp on one of MACV-SOG’s (and Special Forces’) first-ever combat parachute insertions into Laos. Jumping at night from an altitude below 400 feet, without reserve parachutes, the team inserted successfully, but soon learned they had inserted into a battalion base area and were extracted under fire later that day.
Two indicators of Garry’s reconnaissance skills come to us from his battle-hardened, former-NVA team members. Their name for Garry was “Ghost”, alluding to his skills in the woods. Secondly, when he was transferred to the SOG launch site at Nakhon Phanom, Thailand, his entire team quit running recon, every member refusing to go out with any other team leader.
When Garry arrived at NKP, he put the experience of many missions on the ground to work and was immediately effective as both the Operations Officer and, perhaps more importantly, as a FAC Rider supporting deployed recon teams. As one Prairie Fire FAC pilot put it, “When I had Garry in my back seat, the airplane always felt complete.”
After his separation from the Army, Garry enjoyed a successful career in the ski industry as an alpine ski instructor, racing coach and manufacturer’s representative, to include collaborating on designing light weight combat boots for special operators in rugged terrain. He continued to serve in the reserves in the 11th Special Forces Group. For the rest of his life, he fiercely devoted himself to contributing to the welfare of the Special Forces Regiment and today’s SF soldiers. He lectured countless Special Forces Officer and NCO Qualification Courses presenting visual depictions of lessons-learned during Vietnam special operations. Garry was an ardent supporter of the Special Operations Association Video History Program, again bringing our combat lessons-learned to today’s soldiers.
close