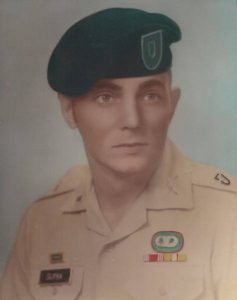 1LT Joseph Slifka, who died January 21st, 1972 while a member of TF1AE. SSG Don F “Sluggo” Murphy tells the story of the loss of 1LT Slifka (originally printed in the November 1994 issue of The Green Beret).

“Those involved from CCN were RT Connecticut lead by Kevin “Snake” Smith, RT Habu the Bright Light Team, led by SGT Lemuel McGlothern, and the air assets from MLT-1 located in Phu Bai, RVN. The actions of both recon teams, the Navy UDT divers, and the combined air assets were instrumental in the success of this mission. I was the airborne controller (Covey Rider) flying out of MTL-1 at Phu Bai, and I worked the mission on both dates. I arrived on station to relieve another Covey, who had just extracted RT Connecticut from a hot LZ. I got a visual on the extraction package of slicks and guns. They were following the blue line east through a remote mountain pass near the Lao border. Knowing they were low on fuel, I instructed slick lead to follow us back to the launch site. After several moments I heard lead say, “Mayday! Mayday! Mayday, I’m going in!” We turned West just in time to see him crash land on a sandbar in the river. Aboard the aircraft was a crew of four, SSG Kevin “Snake” Smith, the One Zero, his One Two, 1Lt Slifka, and four CIDG team members.

Snake radioed that all was okay, the bird was shut down and the guns removed. Swiss seats were tied together, then Snake swam to the North bank and began ferrying the rest across using the chopper as an anchor point. While this was taking place, I had to send the slicks and guns home because they were low on fuel. I ordered up TAC air, a set of Gunfighters (F-4s) that were scrambled from Da Nang with an ETA of ten. Also, two Navy fighters were diverted from the trail with residual 20mm. Our launch sergeant, MSG Chuck Dover, had been monitoring our situation and said help was on the way.

Before the transfer to the North bank could be completed, the team began to take small arms fire from the wood-line and was returning fire. We could see the muzzle flashes so we laid down a mark and ran in the Navy jets expending their ordnance. Our Gunfighters arrived with a TIC lineup on board of napalm, CBU, and frag bomb with fuse extenders. The strike was laid in and suppressed the enemy fire.
Snake called that he had an American missing and when last seen the American was covering the team from the sandbar. He team began ground search of the river bank, and we low-leveled to assist. The river had a sand bottom and was crystal clear. I spotted 1Lt Slifka’s body about two hundred meters downstream, in a deep pool at the edge of a waterfall.

The extraction package arrived and the team was extracted with the aircrew. CPT Walter S. Mullen, our assistant launch officer, hovered above the pool in the chase bird and attempted to recover the body with a grappling hook. He was not successful, as the body was hopelessly snagged in the branches of a submerged tree. Our covering guns reported a village hidden under the jungle canopy, and the Cobras placed fire on it with rockets and 40mm.

I received a call that Snake was inbound with swimming gear and ropes to attempt a recovery. This attempt also failed because the river was too swift; without scuba gear and weight belts it was an impossible task. By this time the crashed Huey had settled onto it’s right side of the sandbar, but was in no danger of being swept into the current. Snake requested and received permission to make a recovery attempt on the following day. Preplanned air was ordered and two Navy UDT divers were sent up from Da Nang. If the recovery went smoothly the RT would do a BDA of the village, which was to be hit with a devastating air strike. Also, the Bright Light team would be used to cover from the South bank. Additional slicks and guns would sit on strip alert with a round-robin turn around for constant air cover from insertion until extraction.

Our intelligence sergeant, SFC Kenny Anderson, provided the intel pictures I had taken of the target. He suspected the hostiles in the target area to be part of one of the NVA Food Production and Transportation Battalions known to work the area. MSG Chuck Dover briefed all concerned on how the operation would work. Timing and start-up time would begin when Covey reported the target clear of ground fog. We launched our 0-2 at about 0900 hours on 21 January and climbed to 12,000 feet. We began our normal sneak and peek through the clouds to observe the target which was socked in. We busied ourselves by checking known or suspected AAA and SAM sites on both sides of the fence; we also noted likely avenues of approach to the target area. By 1000 hours the fog had dissipated, and I reported this to home plate. At that time Chuck gave the order to play ball.

The teams launched and our first set of Gunfighters arrived above us. Our set of Sandys had just left NKP and were climbing to altitude. With all assets on station we went down to lay in the mark on the village. Our fast movers rolled in and each dropped a large WP bomb, creating a roaring inferno. Next they dropped combination of delays and daisy cutters. Our capping A1Es requested to dump that nape to increase playtime, and we had them hit the eastern and western edges of the village. When they returned to cap they reported over four hours playtime left. At eight minutes out we released our second set of Gunfighters to prep both Las with napalm and 500 pound daisy cutters. Both teams hit their LZs at the same time and had them secured in short order. We put both sets of Cobras in a racetrack pattern to prevent any reinforcements from entering the area and to suppress any AA threat. I called ABCCC (Hillsboro) and reported the target box hot. Then Snake reported that he was on the sandbar and he had divers in the water. Using the Huey as an anchor point, they belayed the divers down stream. My greatest worry at that time was that of the belaying team being hit without safety ropes the divers would be lost over the falls and onto the rocks below. After what seemed like forever, the Snake reported that the Lieutenant’s body and the divers were recovered. Both divers were completely exhausted, and we sent in the chasse bird to pick them up.

With the recovery completed, we initiated the BDA when our fresh Cobras came on station. We sent both sets of guns to orbit on the flanks and sent in the Sandys to bomb and strafe the front of the RT. The team could not get into the village due to the fires and secondary explosions. They did get some good intel pictures and examined some fighting positions. In addition to some enemy equipment, they recovered quite a few farming implements. Both RTs were extracted without further incident and the target box was reported cold.

My last act was to order the guns to destroy the drowned Huey, and we watched as some of the wreckage slipped over the falls. The post mortem examination revealed that Joe drowned; we understand his family had a hard time dealing with this because he was an Olympic class swimmer. We will never know exactly how this tragic accident happened, but Kevin and myself have tried to describe the incident as accurately as possible after 22 years.”