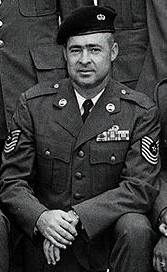 SYNOPSIS: On January 28, 1970, Capt. Richard J. Mallon, pilot; and Capt. Robert J. Panek, electronics warfare officer, were sent as escort to a reconnaissance aircraft on a mission in North Vietnam. Their F105 aircraft was a G model, which was an adaptation of the F105F used in the Wild Weasel program.

The F105F Wild Weasel featured radar homing and warning gear. Upon pinpointing the radar at a missile site, the Wild Weasel attacked with
Shrike missiles that homed in on radar emissions. The F105F was a stretch-limo F105, with a longer fusilage to allow for a second crewman. As modified for the G, the F105 launched Standard ARM rather than the shorter range Shrike. During the period of 1965-1972, the F105 performed on many diversified missions in Southeast Asia, including SAM attack, bombing, and as in the case of the mission of Mallon and Panek, armed escort/diversion.

Mallon and Panek’s aircraft was shot down during the mission, and they both successfully ejected and landed safely in an enemy controlled area about 20 miles northeast of the Mu Gia Pass on the mountainous border of North Vietnam and Laos.

A helicopter was immediately dispatched to pick up the two downed airmen. When the aircraft was about 50 miles northwest of the location of the F105 crash,it was hit by a MIG and exploded. The helicopter was flown by pilot Major Holly G. Bell, and carried crewmen Capt. Leonard C. Leeser, SMSgt. William D. Pruett; SSgt. William C. Shinn; MSgt. William C. Sutton; and passenger Sgt. Gregory L. Anderson. A short beeper signal was heard from the helicopter, indicating that at least one person aboard may have exited the aircraft. All six aboard were listed as Killed/Body Not Recovered. It was thought that in the cases of Bell and Anderson that the enemy would not likely have knowledge of their fates, but that the Vietnamese could probably account for the other four men. (A determination that was probably made from the relative crew positions and their proximity to the area of the MIG hit and the likelihood of their having escaped obliteration by the explosion.)

Mallon and Panek, meanwhile, were in an area heavily infiltrated with the enemy, and it was known that there were enemy troops in the vicinity. It was thought very probable that the two were captured or killed by the enemy, but never known for certain, as they did not appear in the Hanoi prison system to be held with those American POWs who were released. The Vietnamese denied any knowledge of any of the eight men missing that day.

Some time later, family members were told by a squadron mate that his information was that Panek and Mallon had both ejected safely. Mallon had landed on a road near the Mu Gia Pass and was captured almost immediately. Panek landed in nearby trees and his parachute was seen 30 minutes later, being pulled from the trees. Both men were seen in a clearing within the hour, being surrounded, stripped to their shorts, and holding their hands in the air. Neither Mallon nor Panek were ever classified Prisoner of War, however, but were maintained in Missing in Action Status.

In December 1988, the Vietnamese returned a number of remains they stated were those of American servicemen to U.S. control. The remains of Mallon, Panek, and the helicopter pilot, Holly G. Bell were subsequently positively identified by the U.S. Casualty Identification Laboratory in Hawaii (CILHI).