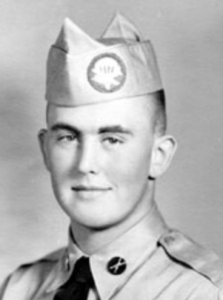 SYNOPSIS: William B. Hunt was a replacement platoon leader III CTZ Mike Force (Detachment A-302), 5th Special Forces Group. On November 4, 1966, he was a passenger on a helicopter on an assigned mission in Tay Ninh Province, South Vietnam (grid coordinates XT 418 657) when the helicopter diverted to conduct a medevac for an American lead company that had suffered heavy losses.

At a landing zone northeast of Soui Da, 10 miles from Dau Tieng, Hunt was lifted into battle to help evacuate the wounded. He voluntarily left the aircraft to help reinforce the remaining troops on the ground, and the helicopter left with the wounded.

The Viet Cong again attacked the position the unit was maintaining that evening. After two days of heavy fighting, and numerous casualties, the Mike Force was overrun by numerically superior forces on November 6. As Hunt carried the wounded company commander, SFC George H. Heaps, out of danger, Hunt was gravely wounded by a bullet that hit him in the shoulder, penetrated his upper back, and exited his side, but Hunt still succeeded in moving Heaps to a covered position where both passed out from loss of blood.

Both Heaps and Hunt later regained consciousness and crawled toward the landing zone for extraction, with two ARVN. Progress was very slow because of their wounds, and finally Hunt told Heaps he could not go farther, and for Heaps to continue on and leave him there. A Nung soldier stayed behind with Hunt, and Heaps and the two ARVN were evacuated. The Nung later reported that Hunt had died, but when searches were made to recover his body, it was not found.