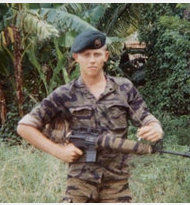 Other Personnel In Incident: Michael F. May (missing)

Source: Compiled by Homecoming II Project with the assistance of one or more of the following: raw data from U.S. Government agency sources, correspondence with POW/MIA families, published sources, interviews: 01 January 1990. Updated by the P.O.W. NETWORK 2020.

SYNOPSIS: Special Forces personnel Sgt. William Evans (the team leader) and SP4 Michael May were part of an eleven man team conducting a secret mission inside Cambodia. They were operating as an element of MACV-SOG, B-50 Project Omega.

MACV-SOG (Military Assistance Command, Vietnam Studies and Observation Group) was a joint service high command unconventional warfare task force engaged in highly classified operations throughout Southeast Asia. The 5th Special Forces channeled personnel into MACV-SOG (although it was not a Special Forces group) through Special Operations Augmentation (SOA), which provided their “cover” while under secret orders to MACV-SOG. The teams performed deep penetration missions of strategic reconnaissance and interdiction which were called, depending on the time frame, “Shining Brass” or “Prairie Fire” missions.

Evans and May’s team operated under Command and Control South, which was located at Ban Me Thuot, but operated from FOB’s (Forward Operations Bases) along the Cambodian border. Working with the 11-man American team was an unspecified number of ARVN troops.

After being inserted at a landing zone, the team moved toward its objective.  As the team approached the wood line, several members of the team heard the sound of rifle safeties being clicked, followed by a blast of weapons fire from the front and left flank. It was later judged that the team had been hit by a battalion-size NVA force from its base camp. The team fell back 60 meters to a mound located in the area. A perimeter was formed, and the enemy closed in on the position.

Gunships were called in to repel the enemy advance, and after they departed the area, at about 1700 hours, the enemy attacked again. Later that day, a projectile thought to be a B-40 rocket exploded directly over the team’s position resulting in wounds to 8 of 11 men. Evans at that time sustained a lethal head wound and died shortly thereafter. May received multiple wounds to the head and chest and died 30 minutes later. The surviving members of the team moved about 60 meters from the area, leaving the remains of Evans, May and three ARVN team members behind.

One account of the action states that medical evacuation teams conducted an aerial search during which aerial photos revealed the Americans on the team had all been killed. Another account reports that the nine American members of the team survived.

Both Evans and May were classified Killed/Body Not Recovered. 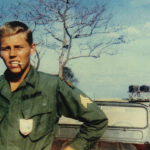 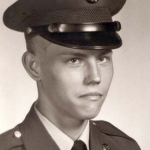 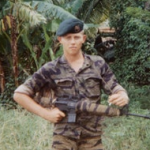