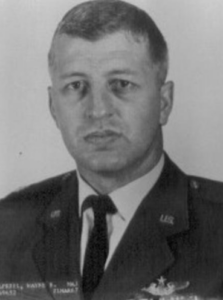 Source: Compiled by Homecoming II Project 31 April 1990 from one or more of the following: raw data from U.S. Government agency sources, correspondence with POW/MIA families, published sources, interviews. Updated by the P.O.W. NETWORK 2020.

SYNOPSIS: The A1 Skyraider (“Spad”) had a varied role in Vietnam, such as flying rescue, close air support and forward air control (FAC) missions. The Congressional Medal of Honor was won by one of its pilots. They were versatile men, trained for many sorts of missions. The rugged and dependable A1, a veteran of the Korean war, flew over 2000 missions in Vietnam.

Major Wayne B. Wolfkeil was a pilot assigned to the 6th Special Operations Squadron at Pleiku Airbase in South Vietnam. On August 9, 1968, Wolfkeil was assigned an operational mission over Laos as the number two aircraft in a flight of two.

About 25 miles west of the city of Dak To, (South Vietnam), in Attopeu Province, Laos, Wolfkeil’s aircraft was seen to make a sharp right turn and crash, exploding on impact. No parachute was seen, and no emergency radio beeper signals were heard. Although there is ample reason to believe the Vietnamese and/or Communist Lao know what happened to Wolfkeil, they have never admitted having information on him.