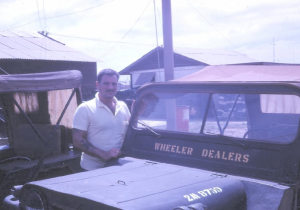 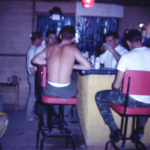 ED behind his bar in Tay Ninh. Notice Ray Charles up on the wall with cowboy hat and sun glasses appearing nightly 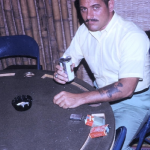 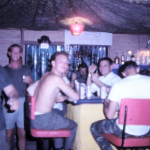 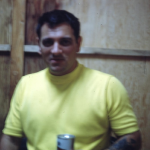 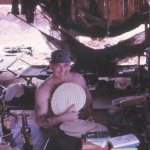 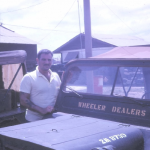 Fast Eddy and his Mercedes 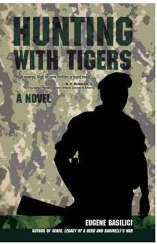 The image on the cover is of Warren (Ed) E. Fisler aka “Fast Eddie”

ORDER FROM AMAZON.COM  Price $29.95 (Hardcover) It is evident that author Gene Basilici did some deeper than the normal research on Special Forces Operations and tactics for his engrossing war novel ” Hunting With Tigers”. His story starts off like a burst of an AK-47 and kicks your adrenalin into high gear. The characters in his book act like real men faced with the lethal encounters. The action is so fast paced that it will leave the reader breathless!

This is the kind of book that gets made into one of those summer blockbuster action movies– it is that good! It is not the typical Vietnam War story and has elements that are both original and entertaining. It is a powerful and moving story of three soldiers who volunteer for Detachment B-57, Project Gamma, a CIA operation that is still secret. The story is fictional but it feels like parts of it were taken right from the real life experiences of some of those men who served in this unit; at least the author gives you that insider feel to the storyline.

This is a high-energy, high-octane, combat thriller that you will not be able to put down until you have read the last word on the last page! This is a must read book! I give this book my personal recommendation. It is definitely a FIVE STAR rated book. By W.H.McDonald Jr. The American Author Assoc.