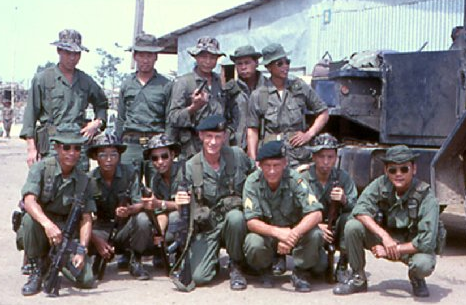 OPERATION THUNDERCLOUD was a highly classified Special Forces/SOG, OP-35, project involving the recruitment and training of captured and Chieu Hoi North Vietnamese Army (NVA) soldiers who were willing to work on our side against the communists. I was the first commanding officer, “volunteered” and appointed by Chief SOG, and I had to organize the whole project from scratch.
All of these handsome young men are former NVA soldiers. I organized them into four three-man teams. We dressed them in NVA uniforms and equipped them with NVA gear. We also gave them a cover story and fake documentation to justify their presence in the target areas we assigned to them. We also gave them concealed radios, cameras, maps and note-taking equipment. We would insert them by helicopter into a designated target area and they would walk down a path or road until they encountered the enemy, at which time they would strive to be invited for a meal or to sleep in an NVA bivouac area. The useful intelligence information they collected was extraordinary. When it was time to exfiltrate them, we would follow one of the predetermined exfiltration exercises – we usually had three or four back-up plans. Frankly, this got a little hairy.
For the first several missions, I had no idea whether I could trust these fellows or not. The proof would be in the pudding, and if I had been wrong, I would have been the pudding!
My former civilian government colleagues will be interested to know that I arranged – totally illegally and out of all approved channels – to have each of these NVA soldiers polygraphed by the Saigon Station’s famous Lou DiFilipo. That name will evoke favorable memories in those of us who were in Berlin! Lou passed every one of them. Using some ruse, I conned the Air Force out of space on one of their aircraft from Danang to Saigon, and I flew the whole THUNDERCLOUD crowd to Saigon to put them on the box. You should have seen their reaction to bustling Saigon!
During insertions and exfiltrations, I would fly in the lead H-34 (flown by South Vietnamese Air Force pilots assigned to SOG, known as the KING BEES).  For exfiltrations, we would make radio contact with the team on the ground and the pilot would fly around until we had visual contact with the team. This was a bit risky because we had to come down to treetop level, and we were always way behind the enemy’s lines – in Laos, Cambodia or a few other places in that part of the world. During insertions and exfiltrations we were very vulnerable to ground fire – and indeed received ground fire on more than one occasion.
None of the team spoke any English – and I didn’t want to teach them for fear this might erode their credibility as NVA soldiers. After establishing visual contact with the team, the Vietnamese pilot would direct the team to a bomb crater, an island in a river, or some other potential landing zone. I would hang out of the door standing on a strut while the chopper approached the pickup point. Door gunners were always more than a little nervous at all this and I had to keep one hand on the gunner’s shoulder to make sure he did not open fire on our guys – who certainly looked the role of bad guys! We would not know whether the North Vietnamese Army guys on the ground carrying AK-47s were OUR NVA soldiers until we were close enough for me to recognize their faces. Obviously, if it was a trap, we would have been sunk.
These were very, very brave young men and I considered it an honor to have the opportunity to work with them. We collected a huge volume of useful intelligence information and, when when I left country, we were teaching them to direct TACAIR strikes. I do not know if this actually developed.
I was in command of THUNDERCLOUD and I had one NCO. Ken Greenwood who, most tragically, has passed away at Ft. Bragg. Ken is not the E-5 in this photo – in fact I do not remember this fine Sergeant, but then the years have a way of eroding memory. Ken and I did a lot together. He was an outstanding Special Forces Soldier and I miss him. But that was it – Ken, me and North Vietnamese – who could have turned on us any moment. But they didn’t! Oh yeah, there was supposed to be a South Vietnamese Special Forces Major assigned to the project, but he sort of disappeared in a huff after I insisted he, too, be polygraphed. A young LLDB Warrant Officer hung around the project, too, and acted as translator/interpreter. He was a good man to whom I gave my custom made Randall knife (like a sentimental idiot). -Bud Williams 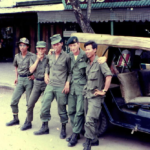 Another shot of me with some of my THUNDERCLOUD troopers. In the middle is Captain Bud Williams. To his right is one three-man THUNDERCLOUD team. To his left is THUNDERCLOUD Team Leader “Vinh.” 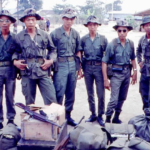 HUNDERCLOUD teams embarking on a mission. Take my word for it, these were tough customers! 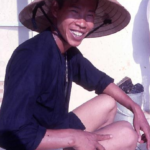 This is THUNDERCLOUD Team Leader “Vinh” preparing for a mission. Look familiar?