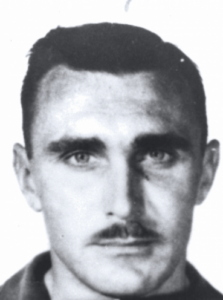 On 30 March 66 the U.S. Army issued General Orders Number 73, award of the Distinguished Service Cross, to Ronald Terry for action 9-14 December 1964 while serving as one of two Special Forces advisors to an eight man recon team. Several actions occurred that resulted in the DSC for extraordinary heroism in helping the wounded after multiple contacts with the enemy in this time frame.

It is believed, according to DSC researcher Bruce Swander, that Terry was one of the few POW/MIAs to earn the DSC before capture. Two others, Bott and Calhourn, were also SF.

SYNOPSIS: Frank N. Badaloti and Ronald T. Terry were riflemen on a Special Forces reconnaissance team operating in An Lao Valley of Binh Dinh Province 12 miles west of Tam Quan in South Vietnam when his team was split during a firefight. The patrol came under enemy fire on the afternoon of 28 January 1966 during which time Badolati was hit. Cecil Hodgson, the patrol leader, from Detachment B52 Delta, was apparently treating Badolati’s wounds as the patrol traveled in small groups from the location where Badolati was hit. Badolati was with two other individuals who survived, and as he was too badly wounded to continue, the three remained for about two hours in their position.

Badolati’s condition worsened, and when the two survivors left the area, they reported that Badolati was dead. They had no choice but to leave his body behind.

Hodgson and Terry evaded for the rest of the day. On January 29, they moved at first light into a defensive position, whereupon they encountered enemy forces and another firefight ensued. Terry indicated that he had been hit, and others thought he had been killed. When they looked for Hodgson, he was gone. Survivors heard additional shots, which they believed were shots fired at Hodgson, and they believed he also had been killed.

The team could not search for Hodgson because of the heavy enemy activity, and were forced to move to a rallying point. They evaded capture for the remainder of the day, and were ultimately picked up by helicopter.

Searches for all three missing were conducted for the next 4 days with no results. Hodgson was classified Missing In Action. Badolati and Terry were classified Killed/Body Not Recovered.