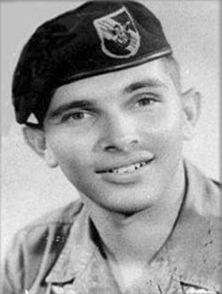 Other Personnel in Incident: Randolph B. Suber (missing)

SYNOPSIS: SSgt. Ronald E. Ray was a platoon leader and Sgt. Randolph B. Suber a riflemen and a team member of a six-man reconnaissance team on a mission in Laos. Both were assigned to Command and Control North, MACV-SOG (Military Assistance Command, Vietnam Studies and Observation Group). MACV-SOG was a joint service high command unconventional warfare task force
engaged in highly classified operations throughout Southeast Asia. The 5th Special Forces channeled personnel into MACV-SOG (although it was not a Special Forces group) through Special Operations Augmentation (SOA), which provided their “cover’ while under secret orders to MACV-SOG. The teams performed deep penetration missions of strategic reconnaissance and interdiction which were called, depending on the time frame, “Shining Brass” or “Prairie Fire” missions.

On November 13, 1969, Ray and Suber and their team were on a reconnaissance mission about 15 miles inside Laos in Saravane Province when they were attacked by a numerically superior enemy force at 1600 hours.

In the initial fire, 3 indigenous were killed, and Ray sustained chest and arm wounds and fell to the ground, groaned and became silent. One indigenous team member, Nguyen Van Bon, checked Ray and shook him but obtained no response. Ray’s weapon was smashed.

Bon stated that he last saw Suber trying to gain contact on his URC-10 emergency radio, then pick up his weapon and aim at four approaching hostile soldiers, but that the rifle did not fire because it became jammed, and that Suber was hit immediately afterwards and fell to the ground. Bon called to him, but he did not move or answer. Their position was overrun by enemy forces and Bon evaded capture and was ultimately rescued.

Even though the report given by the indigenous may lead one to assume Ray and Suber are dead, the Army classified them as Missing In Action. There are a number of reasons to support this determination, including mistrust of indigenous reports. If Ray and Suber had merely been incapacitated, many Army personnel would say that the indigenous would look to his own safety first, disregarding the fate of the wounded Americans. As a general trend, the Army did not accept indigenous reports that were in conflict with or unsubstantiated by other information. Another factor, of course, could be that the Army knew that they were not dead. It is not uncommon for details
of loss incidents in Laos to be obscure. It is even more common for details of MACV-SOG operations to be sketchy.

For every insertion like Ray and Suber’s that were detected and stopped, dozens of other commando teams safely slipped past NVA lines to strike a wide range of targets and collect vital information. The number of MACV-SOG missions conducted with Special Forces reconnaissance teams into Laos and Cambodia was 452 in 1969. It was the most sustained American campaign of raiding, sabotage and intelligence-gathering waged on foreign soil in U.S. military history. MACV-SOG’s teams earned a global reputation as one of the most combat effective deep-penetration forces ever raised.

The missions Ray and Suber and others were assigned were exceedingly dangerous and of strategic importance. The men who were put into such situations knew the chances of their recovery if captured was slim to none.