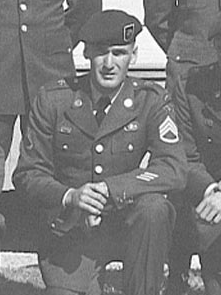 SYNOPSIS: During their war with the French, the North Vietnamese and Viet Cong (then called Viet Minh) discovered that the ideal way to keep supplies and troops moving between the two parts of the country was to move through the neutral countries of Laos and Cambodia. During U.S. involvement in Indochina, the United States was forbidden to conduct war there because of the 1962 Geneva accords which protected the two countries’ neutrality.

It became apparent, however, that clandestine operations had to be conducted in Laos and Cambodia to prevent the enemy from having a free hand in troop and equipment mobility. At first these operations were very secret, to the extent that records were “altered” to show operations in South Vietnam, but later in the war were conducted with relative openness.

SFC Almendariz and SFC Sullivan were on such a mission in Laos on 12 July, 1967. Their reconnaissance team, consisting of three Americans and 8 indigenous personnel, was operating just inside Laos in the extreme southeast portion of Savannakhet Province when the team came under attack. From 1100 hours until 1600 hours that day, the team was under heavy attack and attempting to evade.

Only one of the Americans was rescued, and he reported that both Almendariz and Sullivan had been mortally wounded.

On July 16, a search force went back to the area of contact, but were unable to locate the bodies of either man. Almendariz and Sullivan were listed as killed, body not recovered.