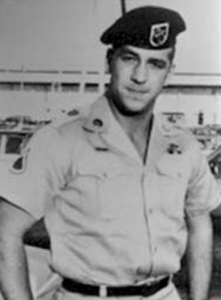 Source: Compiled by Homecoming II Project 01 April 1991 from one or more of the following: raw data from U.S. Government agency sources, correspondence with POW/MIA families, published sources, interviews. Updated by the P.O.W. NETWORK 2021.

SYNOPSIS: MACV-SOG (Military Assistance Command, Vietnam Studies and Observation Group) was a joint-service unconventional warfare task force engaged in highly classified operations throughout Southeast Asia. The 5th
Special Forces channeled personnel into MACV-SOG (although it was not a Special Forces group) through Special Operations Augmentation (SOA), which provided their “cover” while under secret orders to MACV-SOG. The teams performed deep penetration missions of strategic reconnaissance and interdiction into Laos and Cambodia which were called, depending on the time frame, “Shining Brass” or “Prairie Fire” missions.

On December 19, 1968, PFC Robert F. Scherdin was the assistant team leader of a MACV-SOG reconnaissance patrol in Rotanokiri Province, Cambodia, near the border of Laos, Cambodia and Vietnam. The team leader, suspecting enemy activity, had taken four members of the team to check out the area. The rear element, with Scherdin in charge, came under heavy automatic weapon fire as they were moving up to the leader’s position. Montagnard soldier Nguang in this element, saw Scherdin fall on his right side and tried to help him stand up, but Scherdin only groaned and would not get up. Nguang was then wounded himself and realized that he had been left by the other three
Vietnamese of the rear element, whereupon he left Scherdin and joined the rest of the unit.

The team leader and his element were extracted a short time later, then the rear element was extracted, except for Scherdin. The team leader had been\ informed that Scherdin had been wounded and because of the tactical situation, had to be left behind. Scherdin was not seen again.

On December 30, a platoon was inserted into the area to search for Scherdin, but had to be extracted because of heavy enemy activity. In January, 1969, the rear element of the original team was also reinserted and remained four days. They died in a helicopter crash shortly after their extraction. They had not been questioned by the investigation board, and it is not known if they located information concerning Scherdin.

There are only three Americans missing who are associated with the loss of a helicopter in January 1969. Lost January 23, 1969, in the general vicinity of the Scherdin loss, they are SGT. William R. Henderson, SP4 Frank D. Moorman and PFC Robert L. Luster. These three were lost in the Tri-border area in South Vietnam. Their remains were recovered on January 27, 1969 and positive identifications confirmed February 23, 1976.