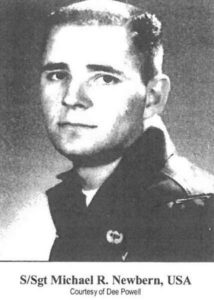 Rest in Peace:  SSG Michael R. Newbern.   His home of record was Kennewick, Washington. He was 22 years of age and had four years of active service upon his death. He started his RVN tour only about seven weeks before this event.  His name’s location is on THE WALL at Panel 11E and Line 99.  SSG Michael Newbern is buried in Riverview Heights Cemetery in Kennewick, Washingon.

SSG Michael R. Newbern’s Silver Star citation excerpt adds to the details of the action, “…SGT Newbern’s team spent the night hidden in the jungle and moved out at daybreak to carry out its mission. After two hours on the trail, the five men received sudden fire from all sides. A reinforced insurgent platoon had let the point man pass through the firing zone and then had opened fire. Observing that the team leader had been wounded, SGT Newbern ensured that the patrol members took proper cover and directed their defensive fire. He initially attempted to lay a sufficient base of covering fire to enable the team leader to crawl from his exposed position.  He then quickly contacted their radio relay and reported their crisis and location. During renewed efforts to rescue the wounded man, SGT Newbern was mortally wounded…” (Per USARV GO#858, dtd 02/28/67.)