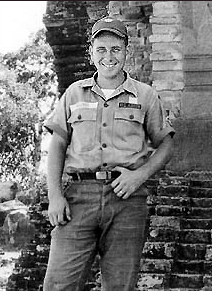 SYNOPSIS: Michael Millner joined the Army in 1969 from his hometown of Marysville, California. He was seventeen years old. By the time he was shipped to Vietnam the Army had promoted him to Staff Sergeant and trained him in light weapons, and he wore a Green Beret. In Vietnam, he was assigned to Detachment A-351, 5th Special Forces Group.

On November 26, 1967, Millner was serving as an advisor to an ARVN CIDG unit which began a search and destroy operation near the border of Cambodia in Phuoc Long Province, South Vietnam. On November 29, the LLDB commander wanted to stop the troops for lunch, against the advice of the U.S. senior advisor to the team, Capt. Matthew J. Hasko.

While breaking for lunch, the unit was attacked by a Viet Cong company. The CIDG became completely disorganized and ran from the field as Special Forces personnel tried to cover the rear and carry the wounded. When the group finally reorganized, Millner was missing. The Special Forces advisors were unable to lead the ARVN back to the area to search for Millner, and withdrew from the area.

On December 2, 1967, a U.S. advisor and a six-man Vietnamese reconnaissance unit made an unsuccessful search of the area. Between December 6 and December 9, a Special Forces unit and their Cambodian trainees made an extensive ground search, supported by aircraft, with no success.

SSGT Michael Millner remained Missing in Action until 1974. At this time, the Army administratively declared him dead, based on no specific
information that he was still alive. It is believed that the Vietnamese could account for Millner.