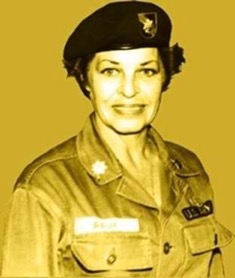 Martha Raye (born Margy Reed; August 27, 1916 – October 19, 1994) and nicknamed The Big Mouth, was an American comic actress and singer who performed in movies, and later on television. She also acted in plays, including Broadway.  She was honored in 1969 at the Academy Awards as the Jean Hersholt Humanitarian Award recipient for her volunteer efforts and services to the troops.

Raye’s life as a singer and comedic performer began in very early childhood. She was born at St. James Hospital in Butte, Montana, as Margy Reed;  despite her birth certificate showing Reed, some sources in the 1970s and 1980s gave her the surname O’Reed.

Her father, Peter F. Reed Jr., was an Irish immigrant; her mother, Maybelle Hazel (Hooper) Reed, was raised in Milwaukee and Montana.  Her parents were performing in a local vaudeville theatre as Reed and Hooper when their daughter was born. Two days later, her mother was performing again. Martha first appeared in their act when she was three years old. She later performed with her brother Bud, and the children became so popular that their parents’ act was renamed Margie and Bud.

In the early 1930s, Raye was a band vocalist with the Paul Ash and Boris Morros orchestras. She made her first film appearance in 1934 in a band short titled A Nite in the Nite Club. In 1936, she was signed for comic roles by Paramount Pictures, and made her first picture for Paramount. Her first feature film was Rhythm on the Range with crooner Bing Crosby.

From 1936–39, she was a featured cast member in 39 episodes of Al Jolson’s weekly CBS radio show, The Lifebuoy Program, also called Cafe Trocadero. In addition to comedy, Martha sang both solos and duets with Jolson. Over the next quarter century, she would appear with many of the leading comics of her day, including Joe E. Brown, Bob Hope, W. C. Fields, Abbott and Costello (in Keep ‘Em Flying), Charlie Chaplin (in Monsieur Verdoux), and Jimmy Durante. She joined the USO in 1942, soon after the US entered World War II.

She was known for the size of her mouth, which was large in proportion to her face, earning her the nickname The Big Mouth. She later referred to this in a series of television commercials for Polident denture cleaner in the 1980s: “So take it from The Big Mouth: new Polident Green gets tough stains clean!” Her large mouth would relegate her motion picture work to supporting comic parts, and was often made up so it appeared even larger. In the Disney cartoon Mother Goose Goes Hollywood, she is caricatured while dancing alongside Joe E. Brown, another actor known for a big mouth. In the Warner Bros. cartoon The Woods Are Full of Cuckoos (1937), she was caricatured as a jazzy scat-singing donkey named ‘Moutha Bray’.

In 1968, she was awarded the Jean Hersholt Humanitarian Award in the form of an Oscar. After her death the statuette was displayed for many years in a specially constructed lighted niche at the Friars Club in Beverly Hills. On November 2, 1993, she was awarded the Presidential Medal of Freedom by President Bill Clinton for her service to her country.  The citation reads:

A talented performer whose career spans the better part of a century, Martha Raye has delighted audiences and uplifted spirits around the globe. She brought her tremendous comedic and musical skills to her work in film, stage, and television, helping to shape American entertainment. The great courage, kindness, and patriotism she showed in her many tours during World War II, the Korean War, and the Vietnam War earned her the nickname ‘Colonel Maggie’. The American people honor Martha Raye, a woman who has tirelessly used her gifts to benefit the lives of her fellow Americans. 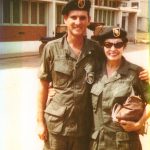 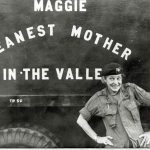 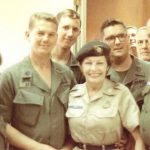 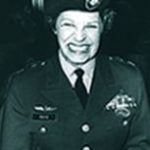 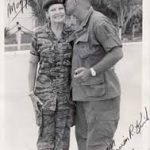 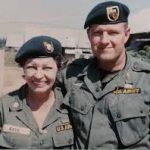 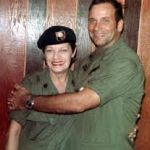 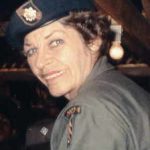 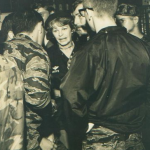 Maggie talks to the troops. Cletis Sinyard (Babysan) wearing the boonie hat. Larry Trimble standing next to Maggie with a mustach. Also Randy Givens and SGM Nameth. Closest to the camera is Jim Lamotte. That night after the festivities Maggie took some of the Recon guys up to the officer’s club and she drank vodka and talked the rest of the night. 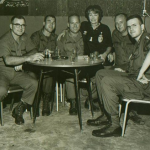 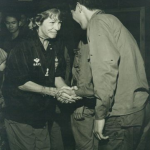 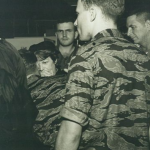 Randy facing the camera, behind Maggie. SGM Tom Nameth is the guy on the far right, in profile. 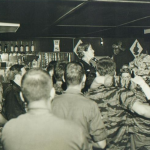 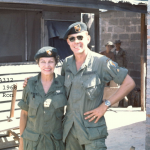 Picture of Ronald with Martha at A-322 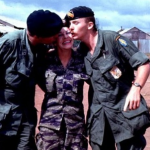 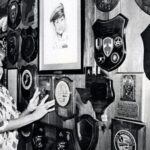