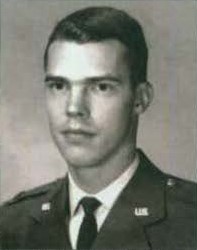 On December 13, 1968, a C-123K Provider (tail number 54-0600, call sign “Candlestick 44”) with a crew of seven left Nakhon Phanom Air Base, Thailand, for a mission over Savannakhet Province, Laos. The Provider was the forward air controller for another aircraft on the same mission, and the two aircraft collided. The crews of other aircraft in the area saw a large fireball that seemed to break up into three smaller fireballs and crash. It was later determined that one of the aircraft broke in two during the collision, accounting for the three fireballs observed. The pilot of the C-123K parachuted to the ground and was picked up by a search and rescue (SAR) team later the same day. He was the only individual to survive the collision; no other parachutes were observed and no other rescue beeper signals were received. SAR efforts continued for several more hours after rescuing the pilot but no other remains were found or recovered.

First Lieutenant John Scott Albright II, who joined the U.S. Air Force from West Virginia, served with the 606th Special Operations Squadron. He was the navigator aboard the C-123 when it collided with another aircraft, and his remains were not recovered. Subsequent to the incident, and while carried in the status of missing in action (MIA), the U.S. Air Force promoted First Lieutenant Albright to the rank of Major (Maj). Today, Major Albright is memorialized on the Courts of the Missing at the National Memorial Cemetery of the Pacific.

SYNOPSIS: Though it had been declared obsolete in 1956, the Fairchild C123 Provider, which was a converted WWII glider, became one of the mainstays of tactical airlift in the Vietnam War. In 1962 the Provider was fitted with special equipment to spray defoliants. Later, it was modified with a pair of J-85 jet engines which increased its payload carrying capability by nearly one third. The first of these modified C123s arrived at Tan Son Nhut on 25 April 1967, and this venerable old aircraft proved to be among the hardest working aircraft throughout Southeast Asia. The C123K differed from other C123 models in that it had the addition of auxiliary turbojet engines mounted in underwing pods. While this addition did little to increase the speed of the “Provider”, it added greater power for quicker climbing on takeoff, and power for maintaining altitude.

This area of eastern Laos was considered a major artery of the infamous Ho Chi Minh Trail. When North Vietnam began to increase its military strength in South Vietnam, NVA and Viet Cong troops again intruded on neutral Laos for sanctuary, as the Viet Minh had done during the war with the French some years before. This border road was used by the Communists to transport weapons, supplies and troops from North Vietnam into South Vietnam, and was frequently no more than a path cut through the jungle covered mountains. US forces used all assets available to them to stop this flow of men and supplies from moving south into the war zone.

Flying at an altitude of no more than 2000-3000 feet, the Provider crew’s mission was to spot enemy truck convoys traveling along the trail, then to drop flares to illuminate the area for the accompanying bombers to attack. As the navigator responsible for monitoring the infrared detection device, Morgan Donahue laid on his stomach in the underbelly of the Provider to observe the situation through an open hatch. Weather conditions at the time were clear with a half moon, ground fog, no wind and no cloud ceiling. At 0300 hours, as the crew of the C123K guided a B57B, call sign “Yellowbird 72,” onto an enemy convoy, the FAC was jolted by a blow to the top of their aircraft in the aft section by the overhead bomber as it approached the target. Major Thomas W. Dugan, pilot; and Major Francis J. McGouldrick, co-pilot; comprised the crew of Yellowbird 72. 1st Lt. Turner, stunned by a blow to the head and lost consciousness as his aircraft lost power. Because of its glider configuration, the C123K did not fall straight to the ground, but drifted lazily in a slow flat spin that lasted several minutes.

During his post-rescue debriefing, Thomas Turner reported: “Yellowbird 72 made either one or two passes over the target and received no ground fire while Candlestick 44 maintained position in our quadrant at altitude. While the bomber conducted its strikes, I began a run to our left in order to stay in our own quadrant, yet be able to scope to clear the previous strike (to observe the bomber’s attack pass and its pull off of the target). Just as we rolled out straight and level, I looked out the window and saw the strike area. The next moment there was an explosion and the aircraft was out of control. I was knocked unconscious for several moments. When I came to, I turned in my seat and could see the co-pilot’s seat was empty and fire was coming into the cockpit from the fuselage area. I turned to the left and opened the window, then unbuckled by seatbelt. I looked out at the wing tip and could see the wing tip and that the left engine was still running. The next minute I was out and clear of the aircraft. I pulled the “D” ring when clear to deploy my parachute. On my descent I saw another parachute below me and 2 or 3 fires on the ground. At that time I was unaware of the other aircraft’s fall, and didn’t know if it was one of the fires on the ground or not.” 1st Lt. Turner went on to say: “I landed safely in a treetop where I remained until search and rescue (SAR) personnel rescued me at dawn. I did not hear any of the other crewmen come up on the radio, and I understand that the only beeper the SAR aircraft heard was mine.”

Members of other aircrews provided additional information about this loss incident. One witness stated he saw a steady stream of enemy anti-aircraft artillery fire aimed in the direction of the aircraft just before the large explosion caused by the collision. Several other witnesses reported there was a large explosion that broke the aircraft into three parts shortly after the initial explosion.

After plucking Thomas Turner out of the tree, aerial SAR personnel continued to search for the other crewman in the rugged jungle covered mountains. Because this area was under total enemy control, no ground search was possible. At 0900 hours on 15 December, the formal SAR effort was terminated when no trace of the remaining crew could be found. At that time John Albright, Morgan Donahue, Douglas Dailey, Joseph Fanning Fred Clarke and Samuel Walker were listed Missing in Action. Likewise, no trace of the B57B crew was found and they were also declared Missing in Action at the same time. Over the years numerous reports filtered through the intelligence community regarding the crew of the Provider including National Security Agency (NSA) intercepted enemy radio communications correlated to at least 3 of the missing men. In 1974 a Laotian refugee who escaped reported having observed an American prisoner thought to have been a member of this aircrew who had been moved to the caves near Tchepone where he was held during the 1968 to 1970 timeframe. This American was later transferred to another location unknown to the refugee. Another intelligence report received shortly after the loss incident indicated that Morgan Donahue suffered a broken leg in the mishap and was believed to have been taken to a communist holding area near Tchepone after capture. Several reports referring to “Moe-gan” or “Mr. Moe-gan” have been received by military intelligence since the end of the war. Frequently this prisoner is referred to as “the animal doctor” because he is being used as a veterinarian to treat sick and injured animals. These reports have come directly from refugees to the Donahue family as well as through US government agencies.

From 1981 to 1984, the Special Forces Detachment, Korea (SFDK) was charged by President Reagan with the responsibility of collecting live POW information throughout Southeast Asia. SFDK was commanded by Major Mark Smith, himself a returned POW from the Vietnam War. Through his efforts, and those of team Intelligence Sergeant Mel McIntire, an agent net of 50 agents was established, specifically in Laos. This intelligence net resulted in Major Smith compiling a list of some 26 American POWs by name and captivity location with Morgan Donahue being one of them. In April 1984, Major Smith received a message from one of his agents specifying that on 11 May three US Prisoners of War would be brought to a given location on the Lao/Thai border. The only prerequisite was that an American be on the Thailand side of the border to receive the men. When this information was reported up his chain of command, Major Smith’s team was ordered not to leave Korea, to destroy all documents pertaining to LIVE POWs and they were sent back to the United States 6 months early. According to Major Smith and SFC McIntire, they believe Morgan Donahue was one of those three Prisoners who could have been returned on 11 May 1984. This documented information was provided to the United States Senate Veterans Affairs Committee in sworn testimony on 28 January 1986.

In June 1987 and again in August of that year, the Donahue family was given intelligence reports tracking their youngest son’s movements from a POW camp in Kham Kuet, Khammouane Province, Laos in the spring of 1987, then to another camp in the Boualapha District of the same province that August. These reports were only a few weeks old at the time the USG obtained them, yet intelligence personnel marked them “routine” and made no effort to act upon the information. One of these reports stated that the POW had been a crewman aboard a C123K aircraft and gave its serial number. When government analysts finally evaluated the report, they discovered that the aircraft number was actually the missing navigator’s father’s home zip code instead of the aircraft’s number. The Donahue family believes this is clearly a message from Morgan Donahue.

The crew of the C123K are among the nearly 600 Americans who disappeared in Laos. Like this aircrew, many of these men were known to be alive on the ground. The Laotians admitted holding “tens of tens” of American Prisoners of War, but these men were never negotiated for either by direct negotiations between our countries or through the Paris Peace Accords which ended the Vietnam War since the Laotians were not a party to that agreement.

Since the end of the Vietnam War well over 21,000 reports of American prisoners, missing and otherwise unaccounted for have been received by our government. Many of these reports document LIVE American POWs remaining captive throughout Southeast Asia TODAY.

Aircrews in Vietnam and Laos were called upon to fly in many dangerous circumstances, and they were prepared to be wounded, killed or captured. It probably never occurred to them that they could be abandoned by the country they so proudly served.