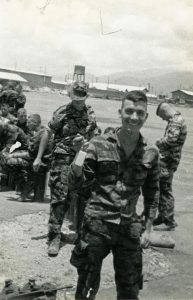 This report was written by LT Dan Thompson after speaking with eye witnesses like Ken Bird, Phil Bauso, and “Smitty”. LT Thompson’s and his platoon were ordered up the mountain to find Lenchner and find the hole in the top of the mountain and get the men out. Marble Mountain Shootout—14 December 1968, Quang Nam Providence, Republic of Viet Nam. During preceding week, Major Moore, S-2, CCN, received actionable intelligence from a wounded POW. The same sapper unit that had attacked FOB#4 on 23 August had slipped back into Marble Mountain. Major Jack Deckard, S-3, sent “A” Company Hatchet Force (Nung) and two Reconnaissance Teams, RT “No Name” (PRU), led by Specialist John “Smitty” Smith and another RT (unk), to find, close with, kill, or otherwise drive the enemy from the mountain. Straphangers, LNO Captain Randy Givens (in country three weeks) LNO LT Francis Bret and others, attached.

First platoon, LT Dan Thompson, cordoned the western base of mountain near old French Fort. One SCU was KIA and two WIA from shoebox mine. Second platoon, LT Fredrick Barbour drove deep into a large grotto. Third platoon, LT Phillip Bauso stood in reserve. Upon entry into the dark, craggy confines, 2nd Platoon came under withering crossfire that scattered the Special Commando Unit, SCU. Salvos of grenades and automatic fire wounded several SCU, Barbour and two straphangers. The platoon was pinned behind rocks as dead and wounded lay exposed to enemy fire. Several attempts to reach the injured were driven back by intense automatic fire. The firefight raged throughout the morning. Each time reinforcements attempted to relieve 2nd platoon, concentrated automatic fire drove them back. LT Barbour, straphangers and six, wounded SCU were driven deeper into the cave. Outside, 3rd platoon engaged in a running gun battle with snipers positioned in caves and spider holes along the southeast wall.

A CH-34 hovered in front of a cave midway up the southern slope of the mountain and exchanged automatic fire. The Kingbee, driven off, trailed smoke from its engine. The nine men, two with serious head wounds, were driven deeper into the cave. Short on ammunition and medical supplies, there was no way out except through a hole in the roof. They faced the imminent prospect of being overrun or hypoxia, from blood loss. Outside, Specialist Smith was critically wounded in a firefight and medevaced.
Assessing the critical situation, LT Lenchner, without directive, climbed the mountain with rope and pistol. As 3rd platoon watched from below, weapons trained to provide cover, Lenchner secured rope, Swiss Seat and carabiner, and without fear or hesitation pushed off. The enemy sprung from the cave, fired and retreated. Lenchner fell mortally wounded.

LT COL Jack Warren arrived at the base of the mountain and asked for volunteers to retrieve Lenchner’s body down. SSGT Ken Bird, RTO, observed men firing M-79 rounds into the cave. LT Bauso, friend and roommate, and unknown officer, responded. Using Lenchner’s rope, Bauso rappelled down the mountain as grenades were thrown into the mouth of the cave. Bauso lowered the body down. For his actions, LT Phillip Bauso was awarded ARCOM/V.  Late afternoon, 1st platoon found a hole on top of the mountain. One each UH1-D, without winch, failed to extract the trapped men and was driven off. By EENT 1st platoon had pulled LT Francis out by hand. That night, LT Barbour and straphanger were extracted by CH-53 as enemy machine gun fired from village. Pilot radioed “bingo” (out of fuel) and cut line. The two men crashed to the ground. With keen insight and savvy skills, SSgt Edward Bartberger was credited with saving the lives of the critically wounded. First platoon secured RON site and ushered wounded down the next morning.

For their actions 14 December 1968; Sp. 4 John “Smitty” Smith (medevaced to Japan) awarded Purple Heart (PH); LT Fred Barbour, ARCOM/V, PH; LNO LT Bret Francis ARCOM/V, PH; and LNO Captain Givens given BS/V, PH. For selfless acts, above and beyond the call of duty, with complete disregard for his own safety as he attempted to route the enemy and provide relief to nine wounded and trapped men, LT David Allen Lenchner was awarded the Purple Heart, posthumously.