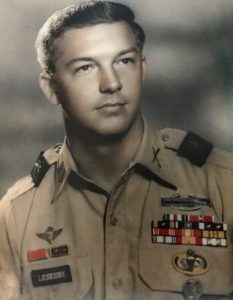 Lt. Col. Edward R. Lesesne, 75, of Columbia, passed away at his home in Albrook, Panama, on Friday, February 12, 2016.
He was born on May 3, 1940, in Lima, Peru, to the late Col. Charles Haynesworth Jr. and Margaret Elizabeth (Rutledge) Lesesne. A proud military veteran of the U.S. Special Forces, he served his country honorably for more than 25 years. His exemplary courage and strength of will helped to earn him two silver stars, five bronze stars, three purple hearts and many other awards and decorations.
Edward is survived by his daughters, Cynthia Dana (Guy) and Saundra Collins (David); a son, Edward Rutledge Lesesne, Jr.; six grandchildren and four great-grandchildren. He also leaves behind his brother, Charles H. Lesesne III (Mary), and many nieces and nephews.